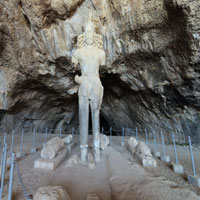 Caving is one of the sports of the climbing branch, which, in addition to the aspect of sport, finds itself in many aspects of exploration and geology. Understanding the minerals and the type of minerals found in caves and exploring different caves, requires a high level of physical training that focuses on caving sports.

In our country, nearly one thousand and two hundred caves have been identified so far that perhaps about 10% of them have been considered only on map, but have never been archaeological, geographic, zoological, climatic and natural. And geology has not been taken into consideration and the precious treasures of the national identity of the Iranian people and the early human being hidden in the darkness of the caves of the country.

Caves are divided into two categories in terms of division:

B. Artificial Caves: Caves created by humans as holes in the rocks of the rocks.

Natural caves are divided into 6 groups:

1. The caves formed by the influence of acidic water in the calcareous layers (which make up 98% of the existing caves of this method)

2. Caves caused by the erosion of waves

3. Caves caused by earthquakes and land-folding

People who are active in the field of caving are divided into amateur and professional categories.

Professional cavers are the ones who go deep into the caves for certain purposes, except for their sporting aspects. These science-related goals are divided into the following disciplines: geology, paleontology, archeology, anthropology, hydrology and biology.

In Iran, you will find many famous caves that have been prepared for visiting tourists and provide good conditions. Even if you are not a caveman, you can go to the great caves that are among the tourist attractions in Iran. Caves such as Alisadr Cave in Hamedan, Quri Qaleh Cave, Karaftu Cave, Saholan Cave, Chama Ice Cave and other Iranian gypsum or salt caves are easily accessible for viewing, and even if you do not have any specialized caving equipment as a normal roundabout You can visit them and other great caves.

As we are in touch with Iranian groups of cave rolling we can arrange a well-organized and professional plan for you. Since there are big and beautiful cave in Alborz and Zagros mountains, there may be the best choice for those who interested in caving as a professional or an amateur.

In the left hand side you can see the list of caves in Fars province.