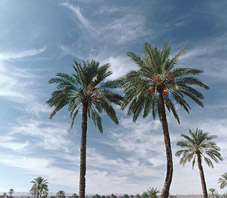 Khuzestan The area covers southern Iran from Khorramshahr and Abadan in the southwestern to Bandar-Abbas in the southern Iran. The three coastal provinces-Hormozgan, Bushehr, and Khuzestan- are hot and humid all year round. The only truly pleasant time to visit them is November to March. Abadan and Khorramshahr which were among big industrial and commercial centers of Iran due to oil explorations as from early 20th century, are now under total reconstruction after Iran-Iraq War. At present the center of activity has shifted to the Province of Hormozgan, mainly around Bandar Abbas, in Kish and Qeshm Islands out of 14 large, inhabited and interesting Iranian islands. The indigenous people of the Iranian shores of the Persian Gulf are often loosely known as Bandaris, from the Persian word of bandar for port. Of Arab, Negro, or mixed stock, the Bandaris are darker skinned than the Persians. Because of the excessive heat in the Persian Gulf region, the siesta is taken very seriously here, even in winter, and very little except public transport functions between noon and late afternoon. The Caspian Sea also contains highly productive fisheries, yielding valuable catches of sturgeon (the chief source of caviar), salmon. Perch, herring, and carp, Other animal life in the Caspian Sea includes tortoises, porpoises, and seals. Navigation is frequently dangerous because of violent southeastern storms, and during the winter months the northern parts of the Caspian Sea are closed by ice. The chief ports along the Iranian shores are Astara, Anzali, Nowshahr, and Bandar-e Turkman.

Offices and shops close throughout the afternoon and reopen for a few hours at about 5 or 6 p.m. Despite being largely desert, semi-desert or mountainous, limes and other citrus fruits, cotton, tobacco, and dates are grown. in the region. There are more than 200 varieties of fish, among other marine life, in the Persian Gulf, but there are surprisingly little variety in the markets and restaurants, although excellent shrimps and prawns are widely available. Elam kingdom of ancient Asia, situated north of the Persian Gulf and east of the Tigris River, actually occupied an area corresponding approximately to the present-day Province of Khuzestan. The capital of Elam was Susa, today the city of Shush. Other leading cities included Awan, Simash, Madaktu, and Dur Untash, the site of present-day Chogha Zanbil ziggurat. 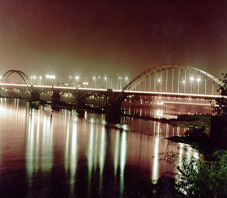 Ahvaz
This city is counted as one of the oldest cities in Iran and was called "Oksin" in the inscriptions and Hormoz Shahr in the Sassanid period. This city has been built on the sediments of the Tertiary period. Karun River has left alluviums on this eroded surface from the Quaternary period and has made it a cultivated and smooth land. The height of Ahvaz city is 12 m above sea level. Karun River has divided this city into western and eastern parts. There is an airport which has daily and weekly flights to Tehran, Isfahan and other cities. Railway passes through this city and connects it to other cities.

Imamzadeh Abdollah (Abdollah Mausoleum), Shuslitar
The present structure of the Mausoleum, where the date 629 A.H. (1231 A.D. ) can be read, belongs to the (13th cent. A.D.). This mausoleum stands on a hillock in the southern part of the town, inside an enclosure. A Kufic portal inscription in the mausoleum, contains the date: "Muharram of the year 629 (1231 A.D. )" The mausoleum appears to have had other appurtenances, such as a Madrasah, library and inn, all of which have now disappeared.