Orumiye (Oromiyeh or Oromiyeh or Orumiye) is the capital of West Azerbaijan. It was also known as Rezaiye (Rezaieh) between 1930-1975
It has an altitude of approximately 1300 meter (4290 feet) and is set on a fertile plain. The famous Lake Orumiye is located just east of the city.
Population of Orumiye is mostly Turkish or Azari so people from this region do not speak Farsi. Also, population is a mixture of Kurds, Armenians and Chaldeans. There is a fairly large Christian community (Protestant, Catholic and Russian Orthodox) in this area.
Orumiye is an ancient city dating back to the middle of the 2nd millennium BC. It has been under the control of Arabs, Seljuqs and Mongols. Its history has been more peaceful after Mongols. In 1918, Christians escaped because of the fear of massacres of Armenians in Turkey although Christian community was reestablished shortly after. 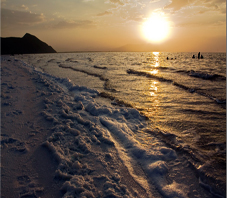 Oromiyeh Lake
Lake Orumiye with an area of approximately expanding to 6100 square kilometers is the largest lake in Iran. It is a salt lake that is believed to have therapeutic benefits especially for rheumatisms. The lake area is undeveloped with a few ports, hotels and spa resorts. On the second largest island in the lake called Kabudi, there is a small village. On Kabudi, you will find many different birds including flamingo and pelican. Because it is a conservation area, foreigners need a special permit to visit the island.