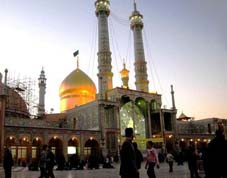 The shrines of Hazrate Ma'soumeh at Qom, is one of the most sacred places of Shiite pilgrimage in Iran. Qom's importance as a pilgrimage center dates primarily from the rule of the Safavid monarchs who, after embracing Shiite Islam, generously endowed its major shrines. Qom bazaar caters to the thousands of pilgrims who visit the Shrine of Hazrate Ma'soumeh. Its shops offer a wide range of items such as prayer beads, candies, protective amulets, ceramic vases, essence of jasmine, and a special Qom sweet called sowhan which is a flat wafer made of honey and tasting like butterscotch.