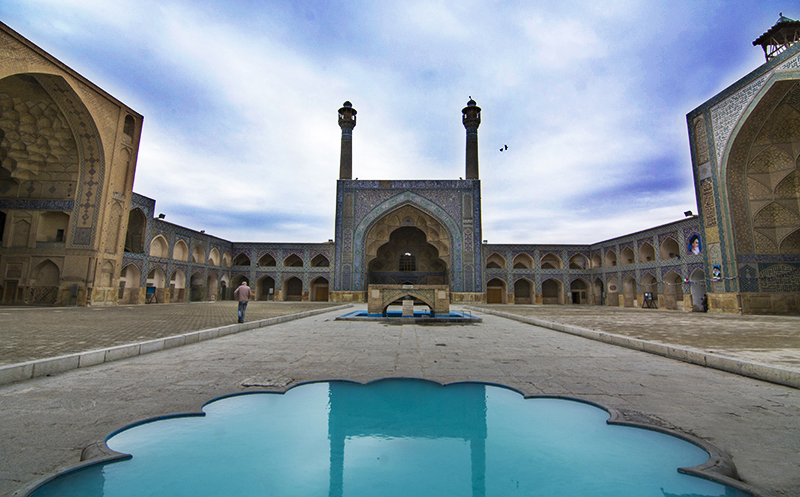 Isfahan Jameh Mosque or Friday Mosque of Isfahan is one of the most prominent architectural works of Iran and the world. Its various parts have been constructed in different historical periods, therefor the present collection, is like a huge museum that represents the evolution of Iranian architecture in the Islamic period and even before.

Archaeological excavations indicate that the mosque may have been an important religious center of the city prior to the Arab domination and has been used as one of the fire temples in Isfahan is Sassanid era. The discovery of a column, decorated like Sassanid architecture style, in the northern part of the mosque, confirms the existence of a pre-Islamic building.

There is some controversy about the history of the mosque's transformation, but it seems that the mosque was built in the early years After Hijrah and in the time of the Abbasids, whose Mihrab was demolished in the third century AH and its QIBLA direction was recorrected. The current landscape of the mosque is mainly related to the Seljuk period, but its repairs and extensions are related to later periods, especially the Safavid era.

Isfahan Jame Mosque, built on a four-porch/portico map, is one of the best known places in the world today because it incorporates artistic and architectural innovations of the Islamic century.

According to various documents, it is clear that the mosque has been damaged and rebuilt over time due to numerous fires and wars. The mosque has several entrances, each connecting the mosque's space to parts of the districts around it. These passages around the mosque indicate the extensive connection of the mosque with the ancient district of the city.

Four porches around the yard of mosque is the Iranian style of building a mosque and is the inspiring pattern for many mosques thereafter. These porches are: SOFEH SAHEB in the south DARWISH in the north MASTER in the western part SHAGERD in the east .These porches are decorate with MUQARNAS and are of the most fascinating techniques of Iranian architecture.

The interior of the mosque courtyard and its tiles date back to the ninth century AH, and the minarets probably belong to the same period.

The dome and the forty pillars around it, located on the south porch of the mosque, are built between the centuries of 1 and 2 AH. The dome was built during the reign of King Seljuk and the Ministry of Khawaja Nizam al-Molk and is one of the rare examples of buildings in the Seljuk era.

The porches in front of this brick dome were built at the beginning of the sixth century AH and its roof is composed of large MOQARNAS. This dome has the most beautiful decorative designs made of brick and plaster.

The dome, located in the northern part of the courtyard of the mosque, the dome of KHNM, was built in year 481 AH. The construction of this dome is symmetrical to the southern dome, is attributed to ABU AL-GHANAIM TAJ AL-MOLK, another minister of the Seljuk era.

The north porch of the mosque known as the DARVISH is built in sixth century and the inscription of plaster inside it dates back to SOLEIMAN, a Safavid king. Its exterior tile decoration is from the Isfahan Archaeological Bureau in year 1336 (1960) and on this occasion, inscriptions are laid on a monument. On both sides of the northern portico and in north of it, there are forty pillars of the sixth century AH. Especially the forty pillars of which have numerous arches with various brick motifs are interesting parts of this enormous historic building.

This porch is known as SOFFEH SAHEB, built during the Seljuk era and its ornamentation dates back to the era of the Qaraqviunloo and the Safavids. In this section there are inscriptions from different periods, including the Safavids. The porch also has a beautiful carving configuration.