One cannot neglect the material and style of the costumes of the Iranian tribesmen. The style of dress differs from tribe to tribe and this variation can be seen in the costumes of both men and women.

The beauty and decoration of the women's dress is however usually more noticeable. A closer look at the function and design of the different types of dress of men and women in these tribes leads one to view the costumes as a symbol of socio-cultural identity.

An investigation into the type of material used for tribal costumes, as well as their design and color, would stimulate the curiosity of many researchers and prompt them into acquiring more knowledge about the importance of dress amongst the various tribes.

Our main reasons for wearing clothes stem from principles of modesty and for protecting ourselves against the sun and cold weather. However , in some cultures, clothes bear additional functions. Amongst the tribesmen, simply wearing clothes is now sufficient, rather the addition of ornamentation such as colorful glass beads, coins and attractive purling is called for and represents social position and the cultural-economic status, such as age or economic prestige, of the wearers.

In addition to its decorative purpose, the ornamentation on the women's costumes may also include a charm or a written prayer to ward off evil, and on the whole represents both the aesthetic and ideological dimensions of the tribal people.

Nomadic life in Iran has an ancient history and this country boasts the largest concentration of traditional nomads in the world. In our explorations, we will travel through the varied landscapes of the Zagros Mountains to encounter Bakhtyari, Luri and Qashqai nomads and observe their daily lives and traditional ways. The women of these tribes weave beautiful kilims, gagims and other types of rugs that they exchange with the traders in villages they pass through on their annual migrations. The patterns they use to weave their rugs are handed down from generation to generation, and they still use the old method of processing the natural dyes. 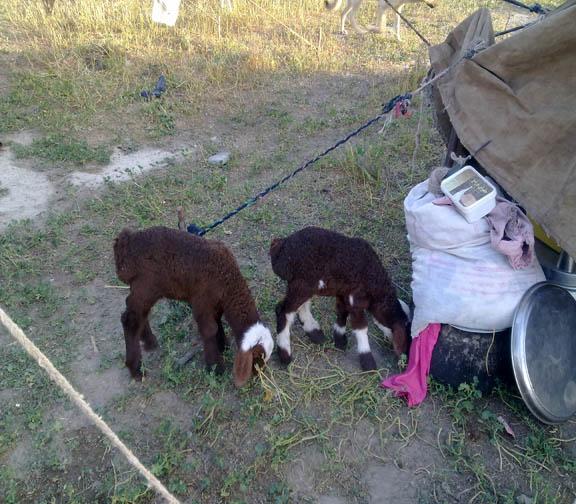 The Quashqai Nomads
Leaving Shiraz, we will travel through Fars Province and the Zagros Mountains. We'll meet one of the most famous tribes in Iran, the Qashqai. Although not originally Persian, the Qashqai tribal confederation has played an important role in Iranian history. As they have for centuries, they still use camels, horses, mules and donkeys to transport their household effects during their migrations between winter and summer pastures. The Qashqai are extremely colorful in their costumes of red, pinks and oranges; one also observes this color on their horizontal looms with bright wools of red, navy, orange, blue, brown, khaki and pink. The rugs, kilims, gagims, and gebbehs woven by the Quashqai tribeswomen are world famous. We will have the opportunity to observe their way of life as we camp among them.