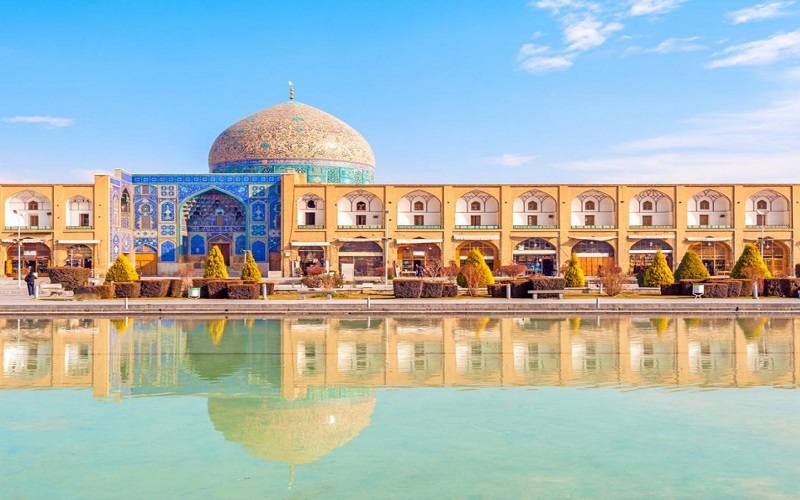 Sheikh Lotfollah Mosque is one the perfect architectural and historical phenomena that remnant from Safavid Empire .

This famous masterpiece of Iranian architecture, situated on the eastern side of Naqsh-e Jahan Square on opposite side of Royal Palace of Ali Qapu in Isfahan, Iran .

Its rich interior and exterior tile ornaments made the mosque one of the most recognizable tourist sites of Isfahan .

Construction of the mosque taking about 16 years to finish .  It was built by the chief architect Mohammadreza Isfahani, during the reign of Shah Abbas I of Persia . After that  in 1920 Reza Shah Pahlavi  repaired and rebuilt it .

The mosque is known for its architecture and tile working.

Orange color has been mostly used in this masterpiece which invokes vitality and charm in the visitors .

This mosque is the result of the artistic excellence of the architect, painter and tile worker who have applied their artistic talents for their faith in God and love of religion. The walls, dome, entrances of the mosque are decorated with the so-called seven-color tiles, poetry ,calligraphy, Quranic verses and names of Imams . The paintings and interior tiles were made by Reza Abbasi , famous Iranian artist .

The figure painted in the middle of the floor under the dome is a peacock at certain times of the day. If you stand at the entrance gate of the inner hall and look at the center of the dome, a peacock, whose tail is the sunrays coming in from the hole in the ceiling, can be seen.The sunlight enhances the peacock's tail.

The dome of Sheikh Lotfollah Mosque is the most circular and most beautiful dome in the world. The pale tiles of the mosque’s dome change color, from cream through to pink, depending on the light conditions.

The layout of Sheikh Lotfollah Mosque has a very non-Iranian and unusual character because it has neither a courtyard, nor a minaret.

As a result, when viewed from the Square, the mosque's main portal iwan and dome do not fall on the same axis, as is always the case in other mosques, but instead the dome appears behind the main portal iwan .