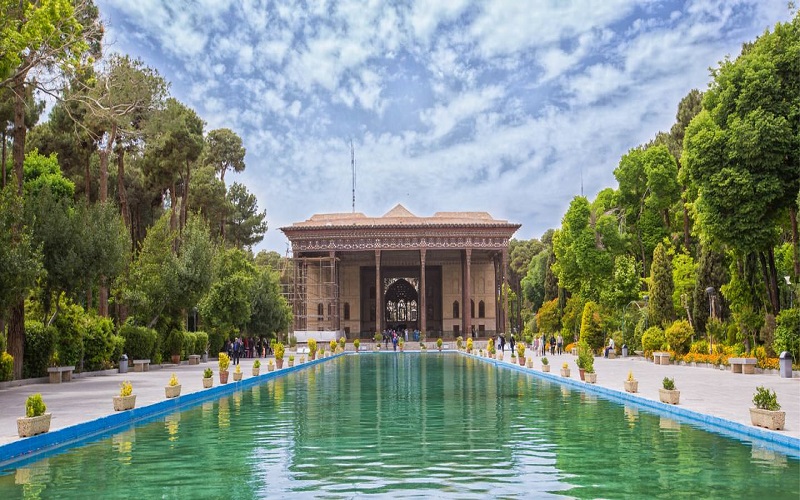 Isfahan is a historical city in the central of Iran. There are several monuments in the city, some of which are registered as UNESCO World Heritage Sites.The city is famous for its beautiful Iranian architecture, covered stairs, mosques and unique minarets.

This has caused Isfahan to be called half of the world in popular culture. Other monuments of Isfahan include Minar Janban, Si-o- Se pol (33 briddges), Khajoo Bridge, Chehel Soton Palace, Aali Qapo Mansion, Vank Church and many other historical places.

You will learn more about Chehel Soton Palace in the following.

One of Isfahan`s most visited attractions is Chehel Sotoun Palace. The meaning of its name is a palace with 40 columns. There is a pool, veranda, and several halls.

Its magnificent architecture leaves everyone in wonder and appreciation. It is also listed as a site on the UNESCO Cultural Heritage list.

Chehel Sotoun Palace and its royal garden are one of the ancient sites of Isfahan. The construction and establishment of this admirable palace date back to Safavid Era. The initial plan of this garden and monument was designed when Shah Abbas, the first king of the Safavid Empire, opted Isfahan as the capital city. He decides to build up a long street, calling it Chahar Bagh (the four gardens), and develop some gardens in it.

Unfortunately, except for Chehel Sotoun Garden and Hasht Behesht Garden, none of these gardens have remained. The immense halls of this palace used to be the selected places for official feasts of the country. After his reign was over, Shah Abbas II made a considerable attempt to perfect this masterpiece.

The land of Chehel Sotoun Palace is 67000 square meters. Its design was inspired by Chinese, Iranian, and European architecture. Before entering the palace, there is a veranda with 20 cypress wood columns. Nevertheless, as the name Chehel Sotoun suggests, there have to be 40 columns.

The reflection of the 20 real columns on the water of the pool, creates the illusion that there are 40 columns. Moreover, the doors and windows are all decorated with fretworks and cachet designs. In addition, the central hall of the palace includes some glamorous paintings on the walls that each refer to a special event on a specific period of time.

The palace contains many frescoes and paintings on ceramic. Many of the ceramic panels have been dispersed. They depict specific historical scenes such as a reception for an Uzbek King, when the palace had just been completed; a banquet in honor of the Emir of Bukhara; the battle of Chalderan against the Ottoman Sultan Selim in which the Persians fought without firearms; the welcome extended to the Mughal Emperor, Humayun who took refuge in Iran; the battle of Taher-Abad where the Safavid Shah Ismail I vanquished and killed the Uzbek King.

A more recent painting depicts Nadir Shah’s victory against the Indian Army at Karnal. There are also less historical, but even more aesthetic compositions in the traditional miniature style which celebrate the joy of life and love.

The hotels which are near this palace: Safavi Hotel, Piroozi Hotel, AliQapu Hotel, Abbasi Hotel. Experience some nights in one of these hotels to create awesome memories while in Isfahan.