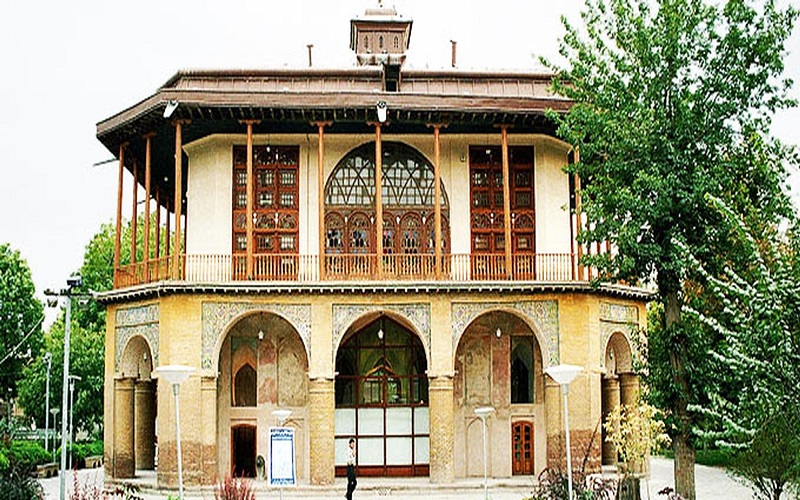 Isfahan, which is known as half of the world, with its historical monuments and pristine and beautiful nature, has always been memorable for Iranians. This city arouses the admiration of everyone and it is impossible to return unsatisfied on a trip to Isfahan. Isfahan handicrafts such as enameling, inlay work and etc…adorn Iranian houses.

Among all the sights of Isfahan, Hasht Behesht Palace has a special place. The palace is a relic of the glorious Safavid era and invites tourists to a fascinating and spectacular journey through the architecture, culture and art of that period.

The royal palace of Hasht Behesht, dominating the superb Bagh-e Bolbol ("Garden of Nightingale"), dates from 1660 and is the most remarkable construction of Shah Soleiman Safavid. Its style is akin to that of the palaces of Shah Abbas.

At the height of its glory, the palace ranked among the world's most remarkable buildings and was described in exalted terms by most European visitors. The palace was greatly refashioned under Fathali Shah Qajar in the 19th century. Since then, the present name of the palace, standing for "Eight Paradises". Some authorities maintain that the palace was originally called Hesht-e Behesht, meaning "The Anteroom of Paradise".

Despite its modest size (it occupies about 700 sq. m and rises 14 m high), the palace has a rather complicated plan in which radial symmetry is deployed. It is basically a chahar taq, the architectural form practiced at least since the Sasanid period, but the Safavid structure reveals considerable development compared to its Sasanid predecessors.

While inSide, one has the feeling of coming into a labyrinth of interlinked rectangular and octagonal rooms 1, Occupying the four corners of the building on two levels and interrupted by open porches 2, on three sides, each different from the others in shape and decoration. The center of the edifice rises two stories and is surmounted by a dome with a skylight at the apex.

All the rooms also had either a finely worked fireplace or a small water basin, which regulated the temperature in cold and hot seasons respectively.

In its heyday, the palace featured the most exquisite decorations: gilded mosaics and mirror-work, calligraphic friezes and brocade panels, marble slabs and stucco moldings.

The surviving decorations are concentrated on the upper floor of the palace.

Preserved in the central hall is a remarkable ceiling with pendentives adorned with mirrors. Among the palace's beauties, one may observe fine marble pools over which water used to flow and try to imagine how beautiful a setting this would have been under the Safavids, Hasht Behesht is quite literally a perfect garden pavilion as it brings to perfection the iconography of a traditional Iranian garden.

The pavilion is fully exposed to the nature and in a sense, even draws it inside through the four porches to the basin of water and the fountain, its spiritual center.

Today the garden has been converted into a city park.