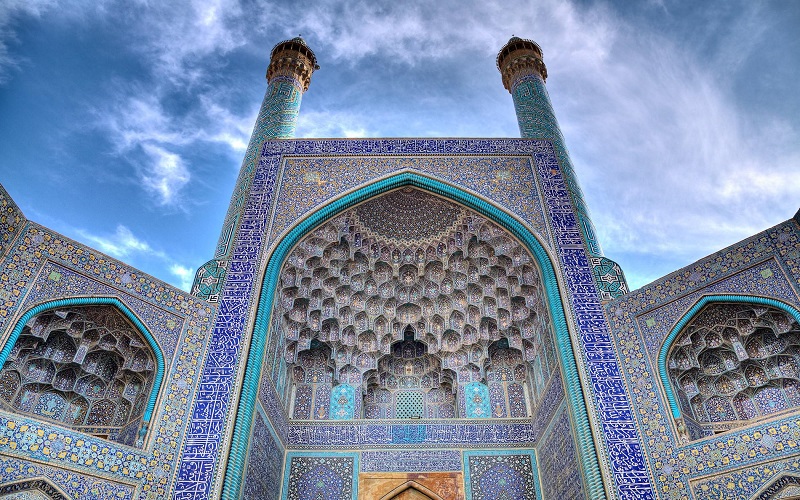 Imam Mosque (Shah Mosque) is considered as one of the most important historical Mosques in Isfahan, which was built during the Safavid era under the rule of Shah Abbas the Safavid King. It is also the most important display of Persian architecture in Islamic era. This glorious mosque with
its iconic blue-tiled mosaics and its perfect proportions, forms a visually stunning monument at the head of Esfahan's main square.

Imam Mosque of Isfahan is one of the everlasting masterpieces of architecture in Iran. Construction of the Masjid-i Shah began in 1611 under Shah 'Abbas, and was completed around 1630 during the rule of Shah Safi, 'Abbas's successor, who ruled from 1629 to 1642. Imam Mosque also called Masjid-e Shah before the victory of Islamic Revolution, is one of the finest and the most stunning buildings in the world standing in south side of Naghsh-e Jahan Square (Isfahan).

The architect of this mosque was Ustad Ali Akbar Isfahani and the supervisor of Moheb Ali Beykollah building and calligraphers such as Alireza Abbasi, Abdolbaqi Tabrizi, Mohammad Reza Emami, Mohammad Saleh Emami painted in that inscription.

Imam Mosque consists of two structures: gorgeous entrance gate with two minarets and the main building of the mosque with a big dome and minarets as well. The mosque yard lies between them. The entrance is made in a shape of iwan. The construction of this mosque started in the early 17th century and is beautifully decorated with seven colored wall tiles, creating stunning mosaic patterns and calligraphy. The unique architectural feature of the mosque.

One of the interesting points in the mosque is the sound reflection in the center of the Great Southern Dome. Large pieces of integrated marble stones and exquisite stones are other interesting sights of this mosque.

Isfahan Imam Mosque consists of two symmetrical Shabstan (prayer halls) on the east and west sides of the courtyard.

one of the most beautiful altars of Isfahan mosques.

The main decorations of this mosque are seven-color clay tiles. In the southwestern school of the

mosque, a simple piece of stone has been installed in a specific place in a certain place, which shows

the real noon of Isfahan in four seasons of the year and has been calculated by Sheikh Baha'i, a

The variety of blue colors in interior and exterior tiled walls became the signature of the mosque.