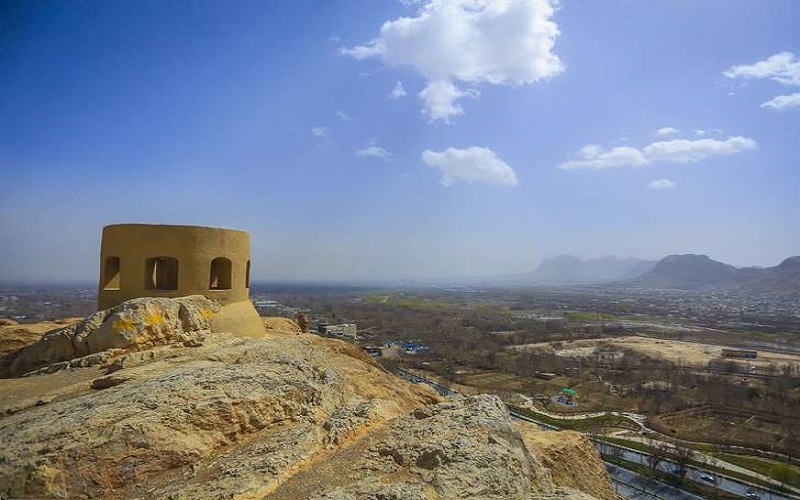 Isfahan is a historical city in the central of Iran. There are several monuments in the city, some of which are registered as UNESCO World Heritage Sites. The city is famous for its beautiful Iranian architecture, covered stairs, mosques and unique minarets.

Then join us to review this important historical monument, Isfahan Fire Temple.

The Fire Temple of Isfahan is the local name for a Sassanid-era archaeological complex (Zoroastrian Fire Temple) situated on a rocky mound that rises 86 meters above the surrounding Marbin Plain outside of Isfahan city.

The mound on which the complex sits is located just north of the road running west from Isfahan to Najafabad, approximately eight miles from the city center.

It is the third largest fire temples among seven fire temples left from ancient Iran. Atashgah main inspiration was the Zoroastrianism, the major religions of the two great dynasties of ancient Persia, the Achaemenids and Sassanids. On Surrounding the temple, you can see pre-Islamic decay all of which are from sun-dried bricks.

It seems that the structure presumably was used by Zoroastrian priests and pilgrims.  Based on the evidence, The Zoroastrian living in Isfahan had used this place for pray. Atashgah hill is a sedimentary rock. The building is a large, circular fireplace with multiple hatchways. The building main material is mud-brick made with clay, lime and long stems of reeds.

The building is made of raw mud bricks 3cm in length and 5cm in diameter from materials, bricks, mud and gravel and reed beds. The large, sun-dried pedestals began almost from the middle of the hill of the fireplace, and at the top became strong columns with rooms in the past. At the top of the hill, there is a round building, with no taller building.

The building has eight corners and a window facing each corner. In the history book written by Ibne Rosteh Esfahani, it was stated that Atashgah was originally used as a castle.

The ancient Iranians were followers of Zoroastrianism before converting to Islam, and in Zoroastrianism they performed rituals to celebrate fire, which they considered to be one of the four sacred principles, and still perform these rituals among Iranians who practice their ancient religion have retained.

The sacred fire was kept in safe fires and should never be extinguished. From there, on certain occasions, they lit wooden sticks and brought them to the fire temples, which are known as "four-roomed" because of their architectural style, and performed ceremonies and sang hymns, and the people gathered around the four-roomed house.

They attended the ceremony. Many of these fire temples became mosques in Iran after Islam, but the fire temples, which were located in remote or sparsely populated areas, remained intact.