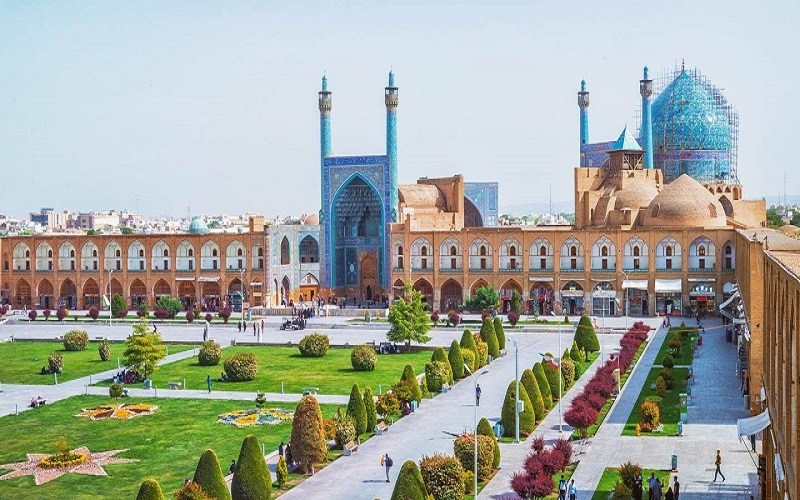 There are several monuments in the city, some of which are registered as UNESCO World Heritage Sites. The city is famous for its beautiful Iranian architecture, bridges, mosques and unique minarets. This has caused Isfahan to be called half of the world in folkloric culture.

Isfahan has been registered as an instance of Creative City introduced by UNESCO, as it uses the abilities and power of its citizens for sustainable development.

Isfahan has about 3 million inhabitants. Its economy is mainly based on technical industries such as steel industries, airplane and Gold industries as this city has gold workshops and factories more than other cities of Iran.

Also handicrafts and tourism is an eye catching economical resource for this city. Isfahan with its countless historical, cultural and artistic touristic sites is one of the three major tourist attractions of Iran and is unique in the world as well.

The very first sign of civilization in Isfahan land refers back to more than 4000 years ago. In the heroic myth of Iranians, Shahnameh, Isfahan is the first capital in history of creation of human.

In Safavid dynasty, this city became the cannon of attraction the most as it was chosen as the capital of a king who loved art, especially painting and calligraphy, and has gathered artists from all country to Isfahan to create too much beauty in this city. From subsequent periods also Isfahan arms signs of art and architecture.

In this article, we pay attention to highlights of touristic monuments of Isfahan, as many tourists have loved based on their reviews.

Naghsh-e-eJahan Square, the second largest square in the world, is the museum of color and tile working of Iran. Shah Abbas 1st, Safavid King in about 400 years ago, has ordered to build this square with its applicable monuments in his capital, Isfahan. Ali Qapu palace, Bazaar, Sheikh Lotfollah mosque and Shah Mosque are the most famous items that worth visiting very much.

The yard, around which the bazaar and mosques and Ali Qapu palace are located, had been the field of playing the sport Polo. The king, used to sit in the terrace of Ali Qapu palace, and watch the game. Polo is an Iranian sport that has a history of more than 2500 years. Nowadays a big pond lies in this field and makes an eye-catching landscape.

Ali Qapu palace, whose name is a combination of two words “Ali”, the name of the first Shia Imam and “Qapu”, a Turkish word meaning door, is the a 6-floor palace in the Naqsh-e-Jahan square in Isfahan. This palace was built by order of Shah Abbas 1st, The Safavid king in about 400 years ago.

This palace is built in 6 floors but the forth and the sixth ones, function for residence. The fourth floor, which is recognized by visitors from outside the best, used to function for the king to sit and watch the polo games. With its nice landscape, his section is also very good for enjoying time in fresh air and under sunlight, which is now possible for visitors.

The sixth floor, with its exceptional wall carvings, is guessed to be the saloon of music. These carvings resemble some Iranian musical instruments “Tar”, “Setar” and “Tombak”. Also the acoustic feature of these carvings strengthens this probability.

Around the yard of Naqsh-e-Jahan, there exists a bazaar with colorful variety of different art works, orchestra of metal art workshops and sweet taste of Isfahan souvenir, Gaz. By passing through this bazaar, you will get inspired by the beauty and color of handicrafts of enameling, marquetry and hand-woven textiles with traditional pattern and the sound of traditional workshops of metal working.

As a masterpiece of colorful tile-working, we can name Sheikh Lotfollah Mosque in Naqsh-e-Jahan square. This Mosque invites you to gaze on its walls and dome. The soul of passion for color and geometrical pattern, mixed with verses of Quran in calligraphy, can be felt in this mosque.

It is stated in documents that Shah Abbas was such a big fan of art, specially color and calligraphy that used to keep candle near the hand of the genius calligrapher of the era, Reza Abbasi, so that he could create the masterpiece of walls and dome of Sheikh Lotfollah mosque. This mosque was dedicated to the royal family.

This mosque, with its huge and breath-taking arcuate architecture, takes your soul to the world of torques color. There you will be hugged by its archetectural atmosphere.

Chehel sotton, whose name means 40 columns, with its garden and pavilion had been a palace for reception of ambassadors and foreign guests.

In the saloon of the pavilion, there exist 5 paintings related to 5 historical remarks concerning the Safavid era. The pond in the garden that leads the guests from the entrance door to the pavilion, reflects the 20 column of the portico of the pavilion and that’s why is called 40 columns.

This mosque is a rich album of evolution trend of architecture in a period of … years. Each corner of it, tells a story of thoughts, intensions, social situation and aesthetic attitude of its era.

Visiting Jame Atiq mosque of Isfahan requires you to pass half a day, gazing to its architecture and listening to their stories by your guide, from its prayer hall to its dome.

“Zayandeh Rood” River and its bridges

Zayandeh Rood, is the name of famous river that originates from Zagros Mounts and passes through the middle of Isfahan. This rives has always been the source of water and life of Isfahan region and hence, has always been beloved and respected, especially in Persian literature.

Bridges over it like Sio-Se-Pol and Khjoo are some of the heritages of Isfahan. Sio-Se-Pol and Khajoo bridges, with its exceptional engineering, has lasted 400 years without any structural weakness.

One of special monuments of Isfahan, is an Armenian Cathedral named “Սուրբ Ամենափրկիչ Վանք – Surb Amenaprkich Vank.”. This Cathedral was built in 1664 BC.

by Armenians living in the Jolfa region in central Isfahan, who were forced to immigrate to Isfahan by order of Shah Abbas II, Safavid King in 1606 BC from Jolfa in Armenia in north of Iran.

The inner part of this cathedral is painted with pictures of motives of Jesus and stories which are believed to be related to him, as well as motive of heaven and hell. The church is unique in its gilding and gold-working among Armenian churches. Khajeh Odik has played an important role in decorating and painting the walls of the church.