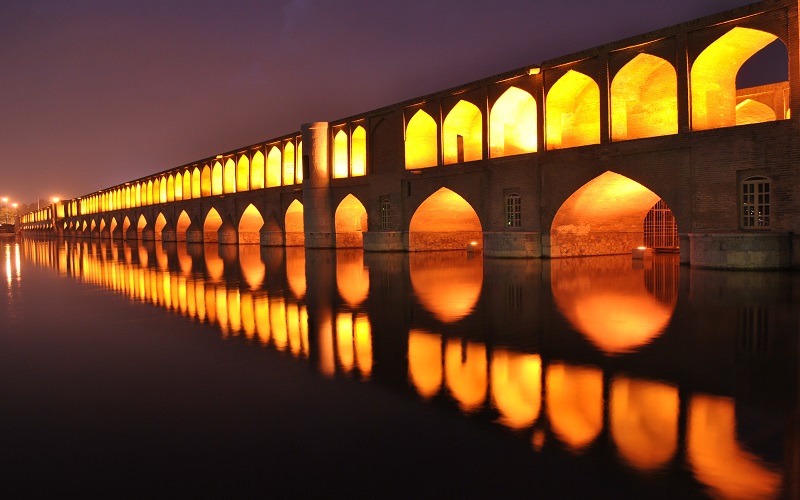 In Isfahan there is a long river is called Zayanderud (is the largest river of the Iranian plateau in central Iran ) has 11 bridge on it . si o se pol or Siose Bridge or “Bridge of 33 Arches” or Allah-Verdi Khan Bridge is one of the most famous and longest  bridge on Zayanderud due to its size, central location and prominent architecture.

This bridge (designed in  Safavid era ) is one of the most famous examples of bridge design of that era .

It was constructed by the inspection and the financial support of Allahverdi Khan Undiladze chancellor of Shah Abbas I, an Iranian ethnic Georgian.

This bridge consists of two rows of 33 arches from either sides, left and right.

For build this bridge they used different types of materials :

1- The stone for the lower

2-Plaster for the upper parts

When you see the admiring architecture and design of this bridge, you will be inspired to step under the arches and touch the bricks .

Si o se pol is famous attracts for Iranian and also foreign tourists .  because of good atmosphere , it becomes a part of nightlife in Isfahan .

Young people spent their most romantic times walking on this bridge, listening to the sound of street musicians, and wait to see the sun sink into the ground and color the river with its brush of scarlet red . The green area beside this bridge is a great destination for the residents and guests of this city and you will always see a large crowd there.  The music and the melody of the river in this magical place melt into your hearts and bewitches you.

People used to gather around the bridge and have ceremonies on special occasions like Nowruz(the traditional Iranian new year holiday). during Nowruz the bridge is decorated with lights and flowers .

Generally , In this historical heritage, you get to have an authentic experience of Iran’s culture and people .

Unfortunately, for many years, the zayandeh-rood river has no water and may have diminished the beauty and grandeur of this bridge, but still many tourists are fascinated by its architecture and glory .