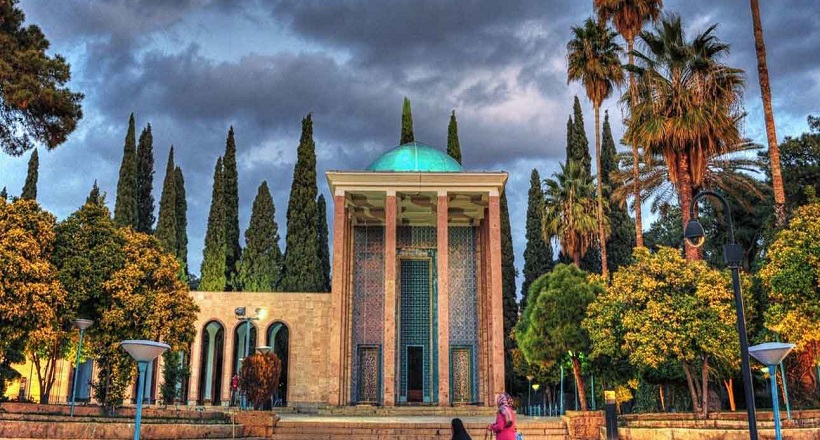 Abu-Muhammad Muslih al-Din bin Abdallah Shirazi
that better known by his pen-name Saadi was a major Persian poet that was born in 1210 in Shiraz and died in 1291 or 1292).
He also was a prose writer of the medieval period.

Saadi is widely recognized as one of the greatest poets of the classical literary tradition, earning him the nickname "Master of Speech".

He went to Baghdad to study Islamic sciences, theology, law, history, and Arabic literature at the Nizamiyya University of Baghdad.
He traveled to some countries such as Anatolia,
Syria, Egypt, and Iraq for thirty years.

His two outstanding literary masterpieces are Golestan and Bustan, and he wrote about his travels and adventurous life in both Bustan and Golestan.

Bustan (His most famous poetry book) is considered as one of the 100 greatest books of all time according to The Guardian.

Saadi was a man of learning and traveling that with no doubt, he lived much of his life as a wandering dervish.
He has been titled as Sheikh because of his great knowledge.
Apparently, he spent the rest of his life in his birthplace Shiraz and was greatly respected by the ruler and people.

His best-known work Bustan was completed in 1257. Bustan is quite in verse. It includes 183 stories in ten chapters about the virtues such as justice, kindness, love, modesty, liberality, generosity, satisfaction, and happiness, and the ecstatic practices of dervishes addressing all people to have a better and happier life. It was called Saadi Nameh in older versions. It contains about 4000 verses.

His masterpiece Golestan was completed in 1258, a year after composing Bustan. It is mainly composed in prose. It includes 8 chapters mainly about the kings’ morality, the dervishes’ behavior, benefits of contentment, silence and talking in proper time, love and youthfulness, weakness in old age, and education. Interspersed among the stories are short poems.

It is one of the most effective books in prose in Persian literature. Saadi attempts to advise people to live freely and to improve the quality of their lives in Golestan. It contains different anecdotes, pieces of advice, and quotations. It can show the cultural and social conditions of the society at the time of Saadi very well. Some characters and stories are real and some are fictional.

It is one of the first Persian books made by print machine in 1824 in Tabriz.

The Tomb of Saadi, commonly known as Saadieh, and Geographically located next to the Delgosha Garden in Shiraz.
The place where his tomb is located today was his monastery during his elderly. After his death, he was buried there.

This tomb was built for Saadi by Shams al-Din Juvayni the vizir of Abaqa Khan in the 13th century.
After this tomb was destroyed in the 17th century, The current building was built between 1950 and 1952 and design by the architect Mohsen Foroughi.

There are eight brown columns on the entrance and to enter you must pass through them.
Nice pools, green gardens, and tall trees surround the tomb of Saadi.

+Tomb of Saadi opening hours are as bellow: