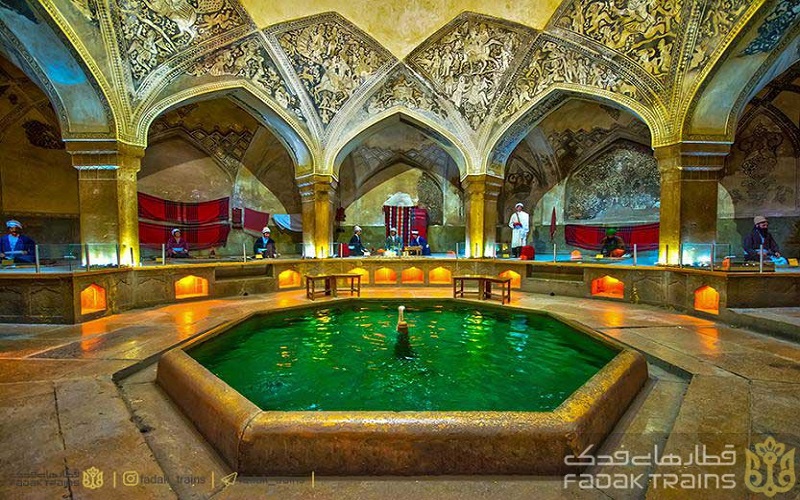 There are several historical attractions in Shiraz that belong to Zandiye era when Karim Khan Zand was the ruler and Shiraz was his Kingdome capital. During his reign, Karim Khan always wanted to make people’s lives easier. Therefore, he ordered to construct several buildings all around the city. The most popular remaining buildings of that time are the Vakil Mosque and Vakil Bath. There is also a bazaar near these two attractions which has the name of Vakil too. “Vakil” was the title of Karim Khan, as he always wanted to serve his people. Vakil means attorney or representative, he was the representative and attorney for the people. Hence, the buildings that have been constructed under his order have his title Vakil.

Karim Khan Zand ordered to build a public bath for people in 1760 and dedicated 1400 square meters area on the west of Vakil Mosque for this structure. The Vakil bath is like other traditional public baths. Instead, there are many great paintings on the walls and ceiling which have been painted by the best artists of that time. That makes the Vakil Bath so different from all other public baths in Iran and it shows how Karim Khan liked his people and wanted the best for them.

Vakil Bath is built in the west of Vakil Mosque, which has the most advanced architectural principles. According to this type of architecture, the entrance of the bath is made with a smooth slope that is below the ground level. The entrance to the locker room is angled, all of these considerations were to prevent the cold weather from entering and the heat from leaving the bathroom.

The heating of the house is also paved, but the remarkable point is that under this paving, narrow corridors have been built in which water vapor flows so that the floor of the bathroom heats up faster. To the south of the heating house is a treasury with two large boilers for heating water. Under the dome, beautiful limestone motifs taken from the religion, tradition, interests and dreams of the people of this land are eye-catching. The water of this bath was supplied through a pit on the western side and water was drawn from it with cows.

One of the features of the old baths was that it was not only a place for take shower but also had other uses. The bathroom was a place for people to gather;a place to gather and hold ceremonies such as the celebration of childbirth, the celebration of dating and courtship of lucky girls, the traditional Hanabandan ceremony, etc. Such uses required a large space and therefore old bathrooms have several sections.