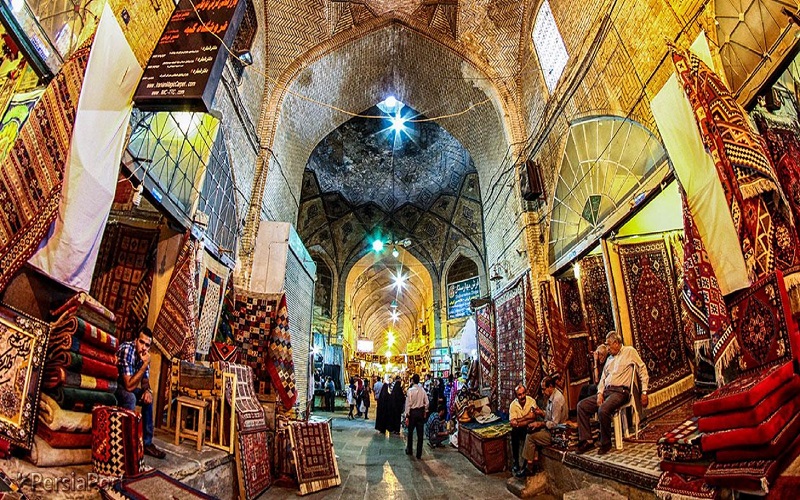 The city of Shiraz was the capital of the country during the reign of Karim Khan Zand, so the city of Shiraz has Khan School, Eram Garden, etc. Meanwhile, Vakil Bazaar is like the beating heart of this city, which is still considered as the commercial center of Shiraz, despite its long history.

This bazaar is just one part of a large collection of Vakil complex which includes a bath and mosque. This bazaar, which is located near to Karim Khan Citadel, is one of the tourist attractions of Iran due to its historical antiquity, type of architecture and colorful shops.

Vakil Bazaar or Vakil Al-Roaya Complex is one of the most famous traditional and historical bazaars in Iran. This bazaar, which was built by the order of Karim Khan Zand, is now located in the center of Shiraz (east of Shahrdari Square).

Other places such as the mosque and the historic Vakil bath are located next to the bazaar.This complex was registered as one of the national  place of Iran.

If you look at the roof of the Vakil bazaar, you will see holes that are intended to illuminate the bazaar. These holes also prevent excessive rainwater from entering the bazaar. The total height of the arches from the ground is about 10 meters due to proper ventilation for the bazaar space.

One of the prominent features of this historical place is the creation of proper ventilation by the windows that are installed above the doors of the shops.

One of the features that attracts your attention when entering the Vakil bazaar is the location of cells and shops at a higher height than the ground level.

The reason for this was to protect the shops from moisture. Of course, in the past, this level difference was greater, but today, filling the bazaar floor is only 5 to 6 steps away from the entrance of the shop door.

What has made this building strong over the years and natural disasters such as earthquakes is the use of materials such as plaster and brick, which is built on large slate.

One of the prominent parts of Vakil bazaar is sarai moshir where you can see valuable handicrafts.