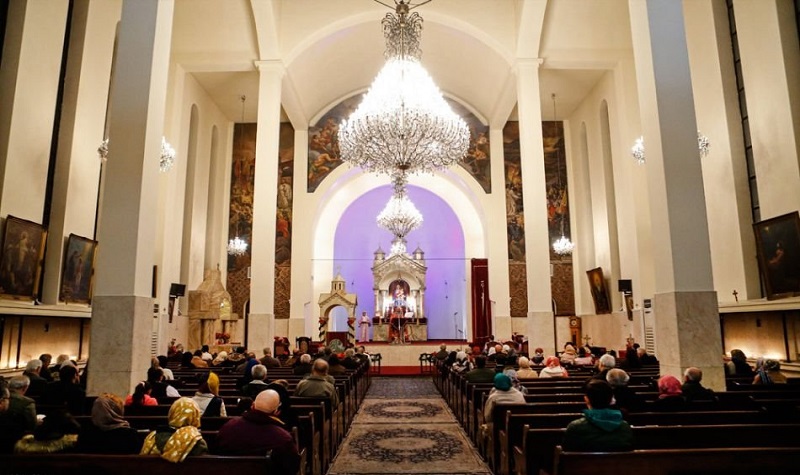 Saint Sarkis Cathedral is a church owned by Armenians, which has been located in the heart of Tehran since 1349. The church was built at the expense of an Armenian philanthropist named Markar Sarkisian and designed by engineer Eugene Aftandelians. The white facade of this building has a special calmness and its elevated stature gives your eyes a pleasing glory and solidity.
Before this church was built, the headquarters of the Armenian caliphate in Tehran was in the Church of the Blessed Virgin Mary; But after the construction of the Church of the Holy Circus was completed, it was moved to this place. The Armenian Caliphate of Tehran is a religious authority and organization that is responsible for managing the affairs of the Armenians of Tehran and the northern region of the country and works in the field of managing the affairs of churches, schools, cemeteries and the cultural and social life of Armenians in Tehran. After the transfer of the building of this religious authority to the Church of the Holy Circus, this church is mentioned as a symbol of Christianity in Tehran.

Architecture of the Saint Sarkis Cathedral church:
The Church of the Holy Circus has dimensions of 36.5 meters long and 17.8 meters wide and is known as the largest church in Tehran. Engineer Aftandelians was inspired by medieval and modern Armenian architecture to build the Church of the Holy Circus, but at the same time made significant changes to these two architectural styles. This church is built according to the plan of Basilica. Basilica refers to important and large churches that have the shape of a cross. The plan of the circus church is basilica both inside and outside and forms a rectangle with a longitudinal direction from east to west. In the Church of the Holy Circus, the trusts on both sides of the altar are on the east side of the building, and the main entrance corridor is located on the west side of the building. The way these elements are placed together makes the church have a cruciform plan from the inside. The white facade owes its white façade to the white marble used on its exterior wall. The interior walls and ceiling are also covered with plaster, and for this reason, the interior of the building has an interesting harmony with the exterior.
Here are the different parts of this church:

1- Dome: The Church of the Holy Circus is built in the style of a single nave; The designer knew very well that in single-nave churches, the weight of the roof enters the longitudinal walls on both sides of the building through arches under the roof. For this reason, these buildings can not be very wide because they have difficulty bearing the weight of the roof. Such structures are usually small, without domes, while the Church of the Holy Circus is both large and has a dome above it. This shows the ingenuity of the architect who combined the architecture of single-nave churches with the architecture of domed halls so that he could place a large dome on the building; A dome that seems to be placed on the roof without a support and is suspended in the air. In this church, there is no mention of columns carrying arches, and the designer has used a kind of supporting beam in the structure called Shah Tir to transfer the weight of the roof and dome. Eight horizontal beams are used in this church, which are placed on eight pillars and have a support inside the walls. In other words, it can be said that the designer has moved the columns that we see in churches with domed halls into the walls and has used a new way of mounting the dome on the building.

2- Bell towers: The Church of the Holy Circus has two bells that are located on either side of the west entrance corridor of the church and above the entrance to the building. These bell towers are quadrangular towers, and at the end there are domes similar to the main dome of the church with octagonal legs. The church architect was inspired by the bells of the Holy Circus Church in Yerevan in choosing the location of the bell towers. Above the entrances and below the bell towers, skylights similar to other skylights can be seen that open into the space of the towers.
3- The entrance of the church: The entrances to the Church of the Holy Circus are located on the west wall of the building. There is a larger main entrance in the middle and two smaller entrances on the north and south sides of the building. These two small entrances are located behind the main entrance and under the bell towers. The upper part of the wall on the west side has a low Santouri. This wall, unlike the walls of other parts of the church, had a glass facade with the role of large crosses, which was changed after its destruction during the imposed war. Since the church is built on a relatively short platform, the designer has installed stairs in the western part of it, which are located in front of the entrance of the church. To enter the church, we pass the main entrance and its high entrance, which is built in the style of the architecture of the churches of the fourth and fifth centuries AD in Armenia. Then we walk into the corridor across the altar of the church and at the top we see a balcony that is used to perform the choir's hymns.

4- Courtyard space: The height of the roof of the church is influenced by the Church of the Blessed Virgin Mary in the city of Ani. The church was built in 988 AD by the second king of Armenia, Sambat II, and is now located on the border between Turkey and Armenia and inside Turkey. The pillar under the dome has created a very large space in the churchyard.
There are three sections for the churchyard: East, West and Middle. The middle part is wider than the eastern and western parts and is 75 cm wider on each side. The 16-sided dome of the building can be seen in this part and is placed on a quadrangle by a quadrilateral. The four arches also rest on the beams and many skylights can be seen in the legs and domes of the church.
Above the outer walls of the middle part of the courtyard, there is a centaur, which has a wide angle and is usually low in height due to its homogeneity with the walls of the eastern and western courtyards. Each of the walls of the central courtyard has three narrow skylights that extend from the top to the bottom of the wall. However, only two skylights have been used in the walls of the eastern and western courtyards. The skylights are decorated with paintings with Armenian national and religious themes and have a very beautiful effect.

5- Altar and trust houses: The sanctuary of the church is semicircular and is located on the east side of the building according to the tradition of Armenian churches. The floor of this part is above the floor of the churchyard and a skylight can be seen in it. On both sides of the altar, there are trust houses, each with a small skylight. These trusts have an entrance to the churchyard and a separate entrance to the outside area. The walls above the altar and its two sides are decorated with murals. The subjects of these paintings are taken from the Bible, by Adman Ayvazian.