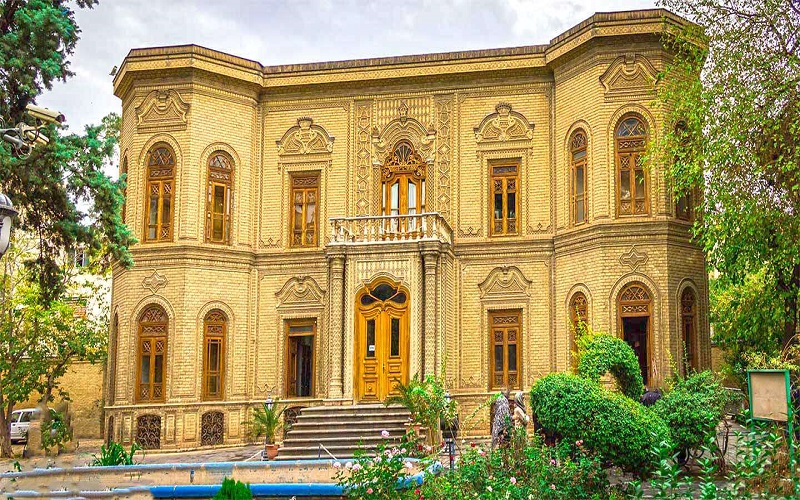 For those who are interested in tourism museums, Tehran is a great destination with its many and varied museums. One of the most important and beautiful museums of this city is the Glassware and Ceramic Museum. This museum is the first and only specialized museum of glass and ceramic in the country and one of the most visited museums in the capital. The glass museum is located in the house of Ghavam Al-Saltanah, one of the famous politicians of the Qajar and Pahlavi period, on Si Tir Street.

In 1912, by the order of Ahmad Ghavam, nicknamed Ghavam Al-Saltanah, a beautiful and magnificent mansion was built in the Qajar garden, which years later became a treasure trove of glass and pottery. The architect of this mansion was Master Ali Mohammad Memarbashi, who made it an office and living place. Ghavam lived in this place for three decades until 1951. After the death of Ghavam Al-Saltanah, his son sold this house to the Egyptian embassy. In the same period and during the time of Gamal Abdel Nasser, then the political relations between the government of Iran and Egypt were strained and the house of Ghavam was given to the Egyptian embassy for seven years. After that, it was the location of the Afghan embassy and the Commercial Bank. Finally, in the 1950s, Ghavam Al-Saltanah House was purchased by Farah Pahlavi's office as a museum and handed over to the former Ministry of Culture and Arts to establish a pottery and glass museum.

In 1976, the project of changing the use of Ghavam building and turning it into a museum of glass and pottery of Iran began. Today, this complex is one of the interesting museums in Tehran province in the capital.

Glassware and Ceramic Museum of Iran and its surrounding garden have a total area of 7000 square meters. This two-story building has a unique Persian-European architecture. There is a wooden stair in the Russian style that will catch your eyes. Besides, with the Intelligence of Hans Hollein, a famous Austrian architect and designer, the interior decoration are very special in its own way. He used the most iconic Persia historical attractions such as Persepolis and Pasargadae (Tachar Palace, pillars, and other items). Hence, the museum resembles the ancient architecture of Persia in a modern way.

Not only the vitrines and objects will amaze you, but the building itself is a masterpiece too. They used more than 50 different types of bricks with floral patterns in the building and exterior. These designs are based on Seljuk art. Don’t forget to take a look at the delicate plaster works! So, just look up at the ceiling and walls from time to time. And, you may fall in love with the mirror works, a lovely item in Persian decoration.

The museum objects, in general, can be divided into five categories each in a different hall:

There is a gift shop on the ground floor where you can buy books, DVDs, and other souvenirs. Also, you can take a lovely walk in the museum garden and yard. Although the museum is located in the middle of bustling Tehran, you will feel peaceful and relaxed in the museum area.