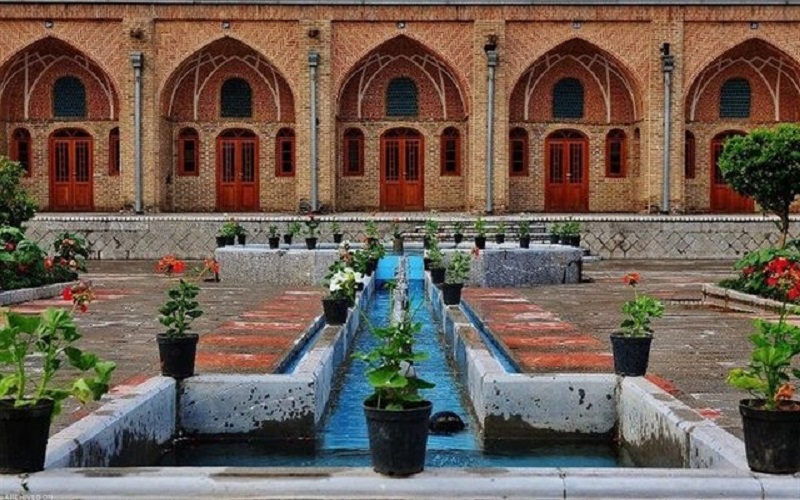 Caravanserai, an Iranian innovation, can be described as a heritage of Safavid dynasty or more exactly speaking, Shah Abbas the Great, in more than 400 years ago. This innovation played a very important role in social life of the time, which nowadays, in form of accommodation and hoteling industry, is still alive and important!

The process of building Caravanserais did not vanished after disappearing the Safavid dynasty and in following years, several other instances were also built across Iran.

By empowering Qajar dynasty, Tehran, the chosen city for the role of Capital of the country, obtained much attention in different aspects, including being important for travel based applications like import, export and transportation. Therefor a Caravanserai in this city must have been an essential element.

Khanat, is the name of the biggest and beautiful Caravanserai in Tehran, which was built at the end of Qajar dynasty about 110 years ago, which still shines in the southern part of modern Tehran.

This Caravanserai, at the time of being constructed, was located outside of city, but by urban developments and increase in population, urban facilities and constructions = reached to surround this building, such that now we should say, this Caravanserai is located inside of the (modern) Tehran.

Khanat Caravanserai with the area of about 1000 m2 includes places for accommodation eating as well as 54 stores for trades.

The main materials used in the construction of Khanat Caravanserai are brick and stone and gypsum mortar, lime and mud. The main decorations in the building are beautiful brickwork and knot making.

In design Khanat, the entrance corridor leading to the courtyard is angular, but this angle, which beautifully connects the square in front of the caravanserai with the courtyard, is hidden from the visitor, like the one in the Imam Mosque of Naghsh Jahan Square in Isfahan. It is intentional.

Visiting Khanat Caravanserai in Teheran can take you to the deepest social and architectural atmosphere of the capital of Iran.