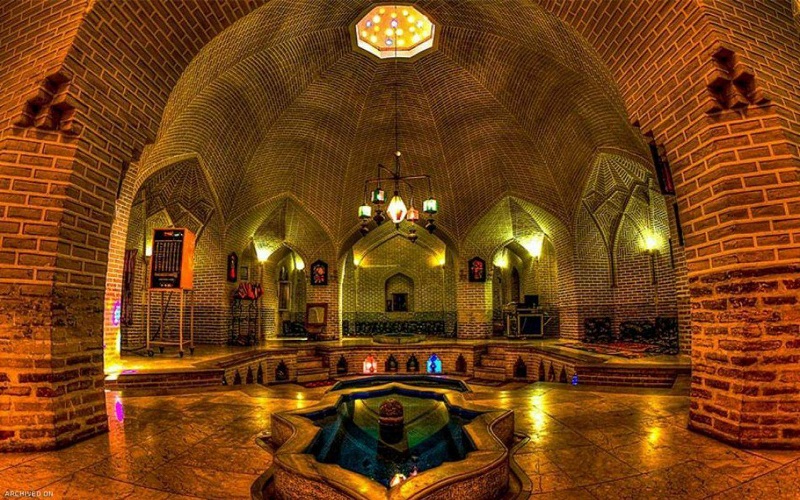 The City of Yazd is located in the middle of the Iranian plateau, 270 km southeast of Isfahan and in the deserts of Iran close to the Spice and Silk Roads.

The city enjoys the peaceful coexistence of three religions: Islam, Judaism and Zoroastrianism.

This city is like a jewel in the heart of the desert that has Iranian architecture in its finest elegance and beauty. The sights of Yazd are so diverse and beautiful that they will water the eyes of the audience.

Join us to walk in the back alleys of Yazd history and art and talk more about the beauties and sights of Yazd.

Khan Complex is one of the most important places in Yazd, in this article, we will get more acquainted with Khan Bath and Bazaar.

In every city of Iran, you can find an old area which consists of a bazaar. In the city of Yazd, this bazaar is part of a complex which are a square, a bazaar, and a traditional bath. They all have the name “Khan”. The Khan Complex dates back to the Qajar era. The most popular part of this complex is its bazaar.

The Khan Bazaar is one of the largest bazaars in the city of Yazd which length is 274 meters and also has a height between 4 to 6 meters. There are 153 shops in this bazaar which are active today.

This Bazaar is actually a combination of smaller bazaars. The building holds historical significance due to its age which varies in different parts of it. The oldest part lies at Amir Chakhmaq Complex. This bazaar is one of the most important areas where most jewelry retailers sell the gold from 20 to 24 karat while in other parts of the country 18 karat are sold.

This section hosts many foreign visitors especially from countries around the Persian Gulf. This collection forms the spinal column (foundation) of the old city of Yazd. Architecturally Qeisariyeh, located between Khan square and Khan School has more space order than other bazaars. It is protected by two wooden doors (gates) which have high artistic value.

Haji Ghanbar Bazaar is the oldest Bazaar in Yazd related to the 9th century AH which is referred to as a collection of shops below and around Amir Chakhmaq Takiyeh. This small bazaar was founded by one of the rulers named Haji Ghanbar in order to boost the economy.

The Haji Ghanbar Bazaar in Yazd caused many different shops to be created and boom many other shops including the well-known Confectionery of Haj Khalife Rahbar.

Darvazeh Mehriz Bazaar was built in the Qajar era and Mughal Empire with the length of 38 meters and width of 3.5 meters. The bazaar has 6 shops with an average opening of 5 meters, which is connected to Khan Bazaar from south and Dar al-Shifa Alley or Darvazeh Tarikhi from north.

Zargari Bazaar (goldsmith) in Yazd with the length of 94 meters, width of 3 meters, and height of 6 meters belongs to the twelfth and thirteenth century AH. This bazaar is similar to Tabrizian Bazaar in terms of architecture style, having a high ceiling with arches and a lightwells sending light down to the bazaar.

The Zargari Bazaar of Yazd has 53 shops with famous and special 20-karats Yazdi gold, which, with its special glamor, strikes the eye of every passerby.

Qeysarie Bazaar of Yazd dates back to the end of the 12th century AH and is one of the five famous Iranian bazaars along with the historical bazaars of Shiraz, Isfahan, Kerman, and Qazvin.

In the past, the title Qeysarie was given to places which had some specific architectural characteristics, for example it was like a lane of Bazaar, a corridor, or a Saray, mostly in such bazaars they sell precious commodities and excellent textiles.

The Panjeh Ali bazaar is known as Mesgari (Coppersmith) Bazaar in Yazd, which is 600 years old, belongs to the 9th century AH and still retains its old traditional context. The Mesgari Bazaar is located in Qiam Street, where various types of copper and metal products such as decorative crafts, kitchen utensils, and agricultural tools are being manufactured and sold.

The Kashigari Bazaar in Yazd is related to the Zandy era, located in Khan Square in Yazd. It contains some small shops and workshops manufacturing some simple agricultural tools and necessary tools for villagers.

Visiting Khan Yazd Bazaar is free and in addition to visiting it, tourists can explore this spectacular bazaar and buy valuable souvenirs.

Traditional Baths had an important role in the history of Iranian architecture. You can see many traditional baths in different cities such as Shiraz or Kashan. Although they are not used today most of them have been turned into museums or even restaurants.

Khan Bath is one of the most famous baths in Iran. It is designed in a simple and cozy way that catches every tourist’s eye. It was built in 1797. The bath has different parts including Shah Neshin, Khazine, and etc.

It has preserved the architectural design of Naser al-Din Shah Qajar Era. Khan Bath has three accessibility entrances that is close to Khan Square, Kashigari Bazaar, and the residential texture of the city.

As it is located in the Khan Bazaar, it is on the way of the tourists who go to check the old bazaar of Yazd.

These days Khan Bath has turned into a traditional restaurant and one of the tourist attractions in Yazd city. So you can enjoy your meal in an old bath and feel the atmosphere of the old days in this building. The structure and the architecture is great.

You can also have perfect Iranian dishes like Dizi which is of great value there.