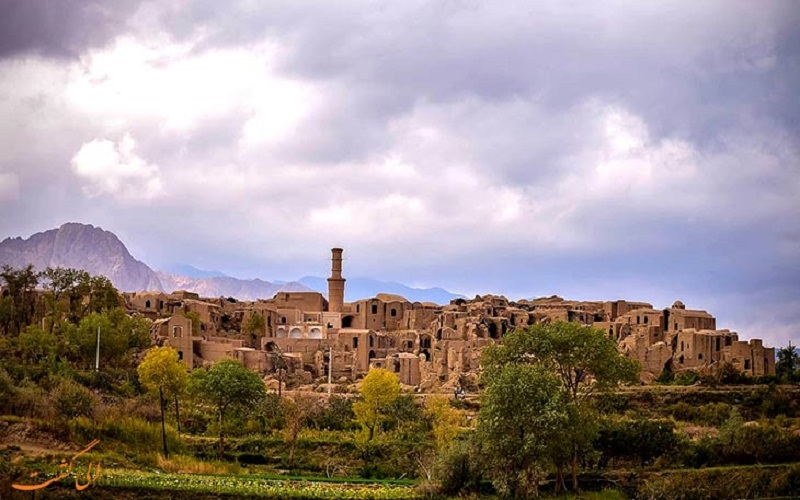 Kharanaq is a village which is located in a pretty remote area in north of Yazd province (about one hour away from the Yazd city (85 kilometers)) .

Kharanaq literally means “The birthplace of the Sun”. It was actually a place to rest for businessmen , pilgrims and travelers who were passing the silk road .there was a caravanserai which was a great accommodation for them .

The Old Town, which is almost completely deserted, and the New Town, where some  around 140 families continue to live .

The weather of this village is dry . every one who visit this village believe that kharanaq people are as warm as climate .

In below you can read about some tourist attractions such as:

castle is the most important attraction of Kharanaq village which is built by brick and clay .

This is one of the vastest castles of Yazd which has been built in 1.1 hectare of land. There are around 80 houses in this castle and also 6 watchtowers at different corners.

The ancestors have dug deep trenches around the castle in order to prevent the enemies from attacking them.

Kharanaq Caravanserai is a single-story building that dates back to the Sassani Dynasty. There is a central yard in the middle of the building and the rooms are surrounding.

This guesthouse was a great accommodation for merchants and pilgrims for centuries . Today, tourists can reserve the rooms and spend the nights at Kharanaq Village Caravanserai.

This monument is registered as one of the national heritage of Iran.

Kharanaq Shaking minaret is also another extraordinary attraction of

this village . Whenever shaking strongly one of the minaret , the other minaret start shaking by the same frequency (like Monarjonban of Isfahan) .

There is also an amazing stone bridge in Kharanaq city.

This bridge has never been a passage for people or animals or livestock to cross.

It just transferred water from one bank to the other bank of the Kal River and it could be used as a flood-prone or dam.

In Kharanaq there is a great mosque which has been repaired during the past years .

A temple of a mosque with its height plays the role of a guide that is seen from about far away.

This is another religious building in the village .

One of the servants of Imam Reza died while they were traveling through the desert . So they buried him in Kharanaq fields and they later built a domical building on his tomb.

In order to live in the desert, people have to store water. There is a brain candy cistern in Kharanaq village in Yazd which was used to store water of seasonal rainfalls and use it during the hot seasons of year.

This  protected area is a home for many different kinds of wild animals such as wild cats and  Lynx .the most important point of  this place is that Darre Anjir is the passing way of Asian Cheetah .

so Fig Valley Protected Area is a small heaven for wildlife lovers.

You can enjoy watching some other Iranian wild animals in this protected area.

There are also a range of high mountains in that place – a good place for mountain summiting. The highest mountain of the area is Khounza Kouh  with 3185 meters height.