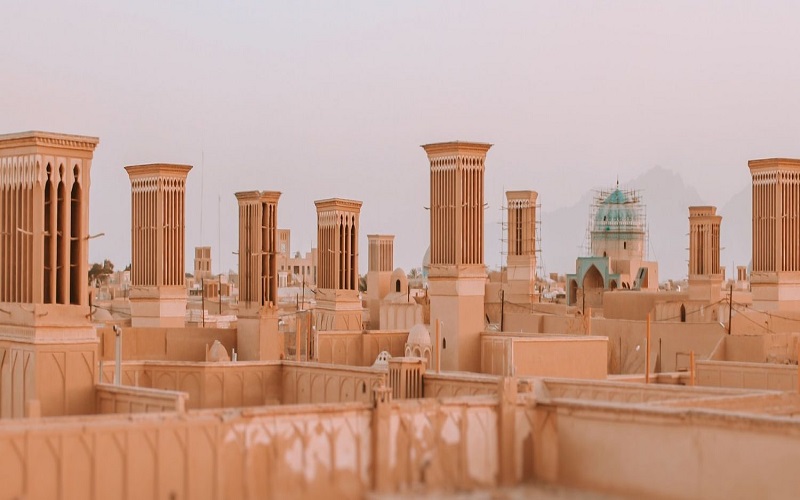 Iranian architecture is an album of philosophic and well-engineered techniques. Regarding the four-seasonal climatic feature of Iran land, we encounter with well-designed and adapted-to-climate architectural works that attracts attention of any curious observer and takes him or her to the deep thoughts behind it.

One of fantastic architectural works found in Iran is called “Sabat” which is an alley with arched ribbons of brick and mud on top, functioning like roof somehow! This architectural work is designed for hot days and hot regions where walking outside during the day is a challenge for inhabitants like almost all parts of south of Iran as well as central regions like Isfahan, Yazd, Kerman and also in Sistan Province.

“Sabat” on one hand protects the passage from sunlight, and is useful for people to have a shadowed path to pass. At the same time the passage is not fully roofed and sky is observable by people. By this method shadowed unroofed passages are created. It also helps the stability of buildings connected against earthquake.

The room above the “Sabat” was usually used as a men's gathering place, and there was also a shady and pleasant space under the shade, which sometimes had chairs also!

“Sabat”'s good view of whole alley increases security and eliminates blind spots. In addition, when cities were targeted by bandits in many areas, “sabat” was a place to fortify and shoot at attackers from above. The height of the “sabat” was such that it was impossible for a horseman to pass under it, and this was a deterrent for the cavalry attackers who attacked the neighborhoods in a hurry and after looting the houses, immediately tried to escape.

“Sabat” is found in regions Yazd, Kerman, Isfahan, Khuzestan, and south Khorasan. Also some instances are found in Kuwait, Egypt, and Tunisia.

The geography of Iran land beside its mountainous parts and jungles and beaches, has a significant area of hot-and-dry land, which takes the life of its inhabitants to real challenge, regarding water and safety against actually exaggerated heat. The inhabitants of these regions have always been challenging for their living needs and comfort, and as mostly it was very hard to take from the hot climate, they had to think of innovations to bring themselves with what they wanted. Having cold enough weather inside the buildings, bedside water, was a need that they have done something interesting for that.

The need for having cold air inside the buildings of these regions, has led the inhabitants to an innovation called Wind Catcher. This system is based on amazing laws of physics, more exactly speaking Thermodynamics, and flow mechanics.

Wind Catcher is a system consisted of a tower made up of two parallel and neighboring but separated channels, whose top has some furrow for receiving (or catching) the wind. In the button part, inside the house, a separate room is devoted to host the lower part of the wind caught. A pond with water is designed exactly under the sector of the shaft of the tower. The functionality of this pond is to helping the air conducted by the tower being cooled. The shaft also has a channel to send hot air from building to the top to exit.

By this mechanism, the wind is caught by the top part of the tower through the furrows. The air, according to flow mechanics principles, because of pressure difference, goes down and touches the water in pond and becomes cooled. It circulates inside the building and exits through the second channel inside the tower shaft.

Wind Catcher has many instances across hot regions of Iran but it was primarily initiated in Yazd Province. The highest Wind Catcher is the one build in the pavilion of DowlatAbad Garden in Yazd.