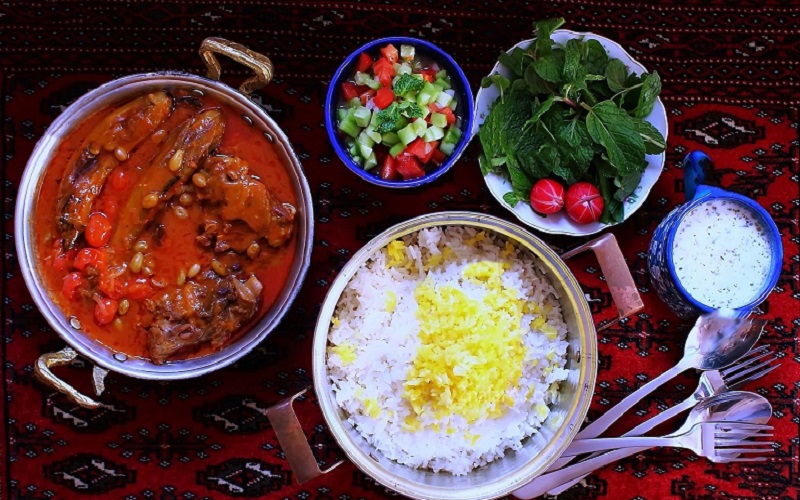 Persian Eggplant Stew with Beef and tomato, also called khoresht e bademjan, or bademjoon is a classic Persian recipe loved by all the eggplant fans that we all love and make on a regular basis.
Bademjan or bademjoon is eggplant in Farsi and khoresh means stew and normally served with rice. This is the stew that you would see at most traditional dinner parties .
Main ingredients: Eggplant, Lamb and mutton, Tomato, Saffron.
It tastes great when it has some tartness to it. This could be accomplished by either of the following ingredients: fresh lime (or lemon ) juice, limoo amani (dried Persian lime), abghooreh (sour grape juice), or ghooreh (sour grapes).
As you know the stews are a big part of Iranian cuisine.
stews and rice dishes are an important part of our culinary tradition.

• Heat 6 Tbsp. oil in a large Dutch oven or other heavy pot over medium-high. Working in batches, cook eggplant in a single layer, adding another 1 Tbsp. oil if pan looks dry, until deeply browned, about 3 minutes per side. Transfer to paper towels; season with salt.

• Add remaining 2 Tbsp. oil to same pot and cook onion over medium-high, stirring occasionally, until softened and browned around the edges, 8–10 minutes. Sprinkle turmeric and cinnamon over and season with salt and pepper. Cook, stirring, until fragrant, about 30 seconds. Stir in tomato paste and cook, stirring, until slightly darkened in color, about 2 minutes. Add tomatoes; cook, still stirring, until tomatoes have burst and mixture is very thick, 7–9 minutes.

• Nestle eggplant into sauce and season lightly with salt. Pour in 5 cups water; bring to a simmer. Pierce dried lemon omani with a paring knife and add to pot. (If using lime juice instead, add when dish is finished cooking.) Cook, gently stirring occasionally, until thickened and eggplant is almost creamy in texture, 40–50 minutes.

• Divide rice among bowls; ladle stew over. Top with parsley and yogurt and serve with flatbread