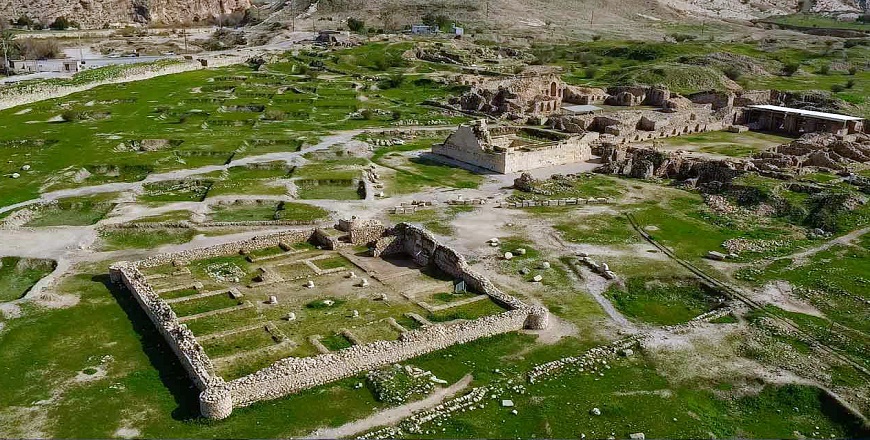 Zoroastrianism emerged from ancient Indo-Iranian cults. The Indo-Iranians were Indo-Europeans who lived as pastoral semi-nomads, probably in the southern steppes of Russia, east of the Volga and Central Asia. They forged a strong religious tradition, elements from which still survive in our time both in Zoroastrianism and Hinduism.

They held fire and water to be sacred and worshipped a pantheon of nature gods such as earth, sky, sun and so forth. They believed that the world was made up of seven regions, the biggest being that inhabited by human beings. ‘Asha’ was the principle of natural law as well as order and truth. It was opposed by ‘drug’ , disorder and lie. There were three principle gods: ‘Varuna’, the god of the oath and lord of the waters, ‘Mithra’, the god of the covenant and lord of fire, and ‘Ahura Mazda’, whose name in Avestan literally meant ‘Lord Wisdom’. There were other gods, including ‘Khavaarenah’ or Divine Grace, who supported kings, heroes and prophets but dropped them if they abandoned the right path.

Zoroaster is the English name of the prophet Zarathushtra, who revolutionized the ancient Iranian cult and taught the first revealed religion of the world. There is much uncertainty about the time and place of his birth. He may have been born in Choresmia (Kwarazm, south of the Aral Sea), or in Sistan. His father was from Media, his mother probably from Rhaga, an ancient city in Central Asia, and he preached in the east, in Bactria, modern Afghanistan. Traditionally the prophet’s lifetime was placed between the seventh and sixth centuries BC but more recent studies have pushed this back to between the fifteenth and eleventh centuries, 1400-1000 BC.

The Indo-Iranian cult put Mazda on a par with two other ahuras. Zoroaster proclaimed Ahura Mazda – Spenta Mainyu (or Holy Spirit) – as the one eternally existing god and supreme creator of all that was good, including all the beneficent divinities. Coexisting with Ahura Mazda was the lord of darkness, Ahriman – Angra Mainyu (the Hostile Spirit) – the equally uncreated god who is the supreme lord of everything bad, of ‘non-life’, in contrast to Ahura Mazda who is lord over all that is good, over ‘life’.

Ardeshir Babakan and the rise of Sasanians

The Sasanians make up the third and last cycle of “Shahnameh”, but one which is not mythological and which mixes history with legend. In “Shahnameh” and other traditional sources Ardeshir descends directly from Bahman, grandson of the hero prince Esfandiyar and great –grandson of Goshtasp, who significantly was the first shah (king) to convert to Zoroastrianism. His ancestor Sasan had become a shepered through misfortune. His grandfather, also named Sasan, was according to Ferdowsi, also a shepherd marrying the daughter of a local king, Babak, who gave birth to Ardeshir; while according to the historian Tabari he was in charge of fire temple in pars (today’s Fars province) and married a local king’s daughter, who gave birth to Babak the father of Ardeshir.

It was during Shapur’s reign that Manichaeism made its first appearance. Mani was an Iranian born in 216 from noble Parthian descent eight years before Ardeshir Babakan founded the Sasanian monarchy. His father had joined an ascetic community in Babylonia, where Mani grew up to speak a Semetic language. Mani saw his mission as providing a synthesis of oroastrianism, Christianity and Buddhism, which both borrowed from and influenced Gnostic ideas and was also influenced by Hinduism and Babylonian beliefs. It was this eclecticism that made it possible for Manicheans to pass as heretics in various different religions.

Decline & Fall of the Sasanians

King Hormoz succeeded his father after the latter’s death in 579. Typically, the country’s stability and strength then begun to crumble, and its underlying tendency towards weakness and chaos set in, leading several decades later to the defeat and dissolution of the Sasanian empire by Muslim Arabs.

Conflict with east and west continued, with little success on either side. There was domestic conflict and opposition too, when Bahram Choubin, an able general, rebelled and in 590, with the support of Hormoz’s son Khosrow and his maternal uncles, deposed and killed him. Shortly afterwards Bahram also deposed Khosrow and declared himself King, though this time his rebellion did not succeed and he lost his life.

Shiruyeh’s turn came within six months when he died in mysterious circumstances. There followed about a dozen rulers one after the other in the midst of chaos, most of whom were killed or blinded until in 632 a son of Khosrow was on the throne as Yazdgerd by the notables, who in fact dominated him. Thus a great empire that had lasted for four centuries, and which had withstood great upheaval and changes of fortune, began to crumble fast. Many long – and short term factors were responsible for its demise, including the long wars, both of Anushirvan and especially Khosrow, and the subsequent chaos and loss of will in the face of a highly motivated and determined adversary. But most telling of all, perhaps, was the fact that people did not regard the state as their own...Read more