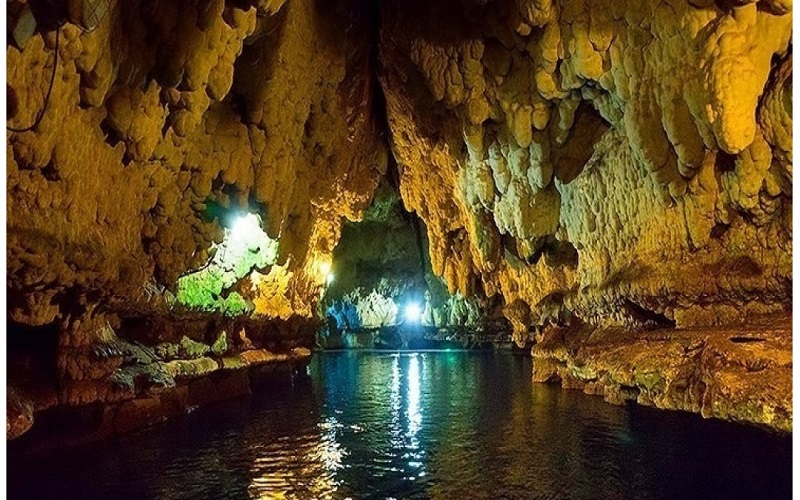 When travelers think of Iran and started their planning to visit Iran, they mostly think about the historical points of the country, while, Iran is very rich in nature in different aspects.

Not only it has beautiful mountainous areas, but also eye-catching jungles, waterfalls, and lakes in every corner of the country. In addition to these beautiful items, there are also more than 300 caves in Iran with different structures.

Dark, humid, and silent, caves are mysterious natural wonders underground. If you enjoy life more when you face challenging adventures we recommend you to add these underground beauties to your itinerary for travel to Iran. Here we are going to introduce some of the most beautiful and most popular caves in Iran.

Alisadr is a70 million-year-old cave that holds the title of the longest river cave in the world. It is located in the heart of Zagros Mountains in a village in Hamadan province. Inhabitants of the village knew about the cave and used the water in the cave. This incredible cave is one of the main attractions of Hamadan along with Avicenna tomb and Ganj Nameh inscription.

Alisadr cave is one of the very few river caves in the world that its high ceiling and big chambers make it possible to wonder in the cave with a boat. You will see breathtaking sites while cruising on your boat on the crystal clear water surrounded by red, purple, brown, green and blue stalactites and columns. Inside the cave temperature is cool during summer and warm on winter days. Drawings of animals and hunting scenes on the walls of Alisadr cave shows it has been a living space in prehistoric time.

Qeshm Island in the Persian Gulf in the southern part of Iran has an astonishing natural attractions. One of those is the longest salt cave in the world with more than 6 kilometers long. Qeshm has breathtaking natural attractions and a Geo Park that is the only Geo Park in Iran and Middle East. The salt in this cave has Magnesium and has a healing effect for people with asthma. Inside the hill, there is a spring of crystal clear water that reflects all the beautiful scenery and adds to the splendor view. The spring creates a stunning pond when it crawls outside the hill. Even though it is a salt cave but there is a great variety of color tones that you will see inside cave.

The cave is situated in Shiraz city, near Kazerun in Chogan valley in the southern part of Iran. There are some terraces in the cave, where you can see the colossal statue of Shapur I on the forth terrace.

This cave is located in an 800 meter height from the ground and its entrance is about 30 meters. And this is why this cave is famous by the name “Shapur”. The statue of Shapur is carved in a stalagmite, and although 1700 years have passed, it is still standing and it is the only statue left from the ancient times which is approximately 7 meters long.  After passing several years, this statue is still sound, although two of its hands are broken. The statue were fallen down and it was restored by the army in 1957. This statue indicates Shapur in a standing position.

There are two stone inscription at the entrance of the cave, which one of them is the translation of Shapur’s inscription in the role of Rajab and the other is how the statue was restored.

Katalehkhor Cave (Katale Khor) is located 140 kmsouth west of Zanjan, in the southern skirts of the Saqizloo mountains. The inlet to this cave stands 6-8 m. above a dry river. The name, Katale Khor, means "mount of the sun". The beauty of this cave is enhanced due to the formation of stalagtites and stalagmites because of calcified precipitation. Besides these are icicles suspended from the roof and these conical shaped hangings due to impurities are multicolored, whereas some are crystals clear In the larger passages, a constant trickle of water has brought about the presence of beautiful designs notable shapes similar to a cauliflower (due to presence of calcified material, it resembles the same) these cauliflowers are also multi-colored. On the cave flooring a skeleton of a four legged animal, which has been converted to a calcified compound can also be noted . En route to this cave, leisure spots filled with natural beauty enhances the eye of the on looker, besides having rest-houses and places of pilgrimage.

Caving is one of the most exciting activities in the world, which cause adrenaline pumping. As you know, caving requires a lot of equipment and practice, so there are some tips to keep you safe:

- Lighting lights, to increase the light due to the darkness of the cave

- Helmet cap, to prevent hard objects from hitting the head

Amateur cavers are the ones who look at this technique more from a sports perspective. Today, the number of these cavers is more than professional cavers, and most of the new caves are discovered by these people. In general, amateur caving is more common among climbers. Many amateur cavers become professional cavers due to their special interest in this technique over the years and gain a lot of experience in some of its fields. Get these experiences by traveling to Iran.