This current tour is the result of a mutual cooperation between PTA and Mr. Buddy Hatton, the prominent American travel documentary film producer and tour operator who has traveled to Iran through PTA to produce “Iran, Then and Now” film. After numerous live shows of “Iran, Then and Now” in the USA, this tour has been sold well. For more information about the primary film and order the production please check www.buddyhatton.com This tour is highly recommended to the North American and European enthusiasts.

We meet in Dubai for a once in a lifetime adventure which will include greeting and transfer to hotel (Transfer Information) & rest before morning tour or Dubai commences.

Attention: The priority of visiting the sightseeing may be changed due to the time of your arrival, preference of your guide and also official and unofficial holidays. 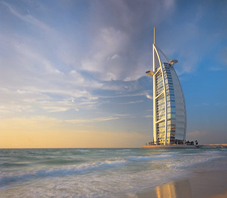 As the first day of this lifetime experience we will sample the historic sites and vibrant cosmopolitan life of Dubai on this comprehensive tour. The Tour begins in Jumeira, the picturesque palace and residential area of Dubai, also home to the famous Jumeira Mosque. Our second stop goes for Desert Safari Tour. A trip to the desert offers a taste of the true heartland of Arabia. This safari tour takes us right into the heart of the desert where we experience the excitement of a roller-coaster ride into the magnificent red sand dunes while remaining mobile on the shifting sands. A brief stop for a breathtaking view of the endless desert will give us an opportunity to watch the sun set over this tranquil solitude. Stay overnight in Dubai.

Today’s tour starts with Sheikh Saeed House (former residence of ruling family). The Tour then continues to Al Bastakiya, the old part of Dubai, to reach the museum located in Al Fahidi Fort. All guests board the Abra (water taxi) to cross the Creek to the spice souk. Before savoring the sights and sounds of the fish, fruit and vegetable market, there is time to shop in the most famous landmark of Dubai – the Gold souk. Afterwards We will fly to Iran and arrive in the City of Love, Shiraz. Upon arrival at Shiraz airport, we will be cordially received and directed for transfer to our hotel. We will have time to rest and relax before our morning tour of Shiraz commences. Stay overnight in Shiraz.

This gorgeous city in the province of Fars is home to famous poets such as Hafez and Sa\'adi and historical sites from different eras stretching back 6,000 years ago can be found. Hafez is one of great poets who impressed everyone with his mastery. His poems give us a special feeling and the peace in his tomb is really outstanding. Sa’adi is a poet, philosopher and mystic who is known as the father of a alternative tourist. About seven previous centuries he travelled to different countries and cities. Then he collected all his experiences in verse and Rhyme prose in two books named Boustan and Golestan. These two books give you Lots of inspiration and information. We will get a chance to pay homage to tombs of these great poets.

Day 5:
an excursion to Persepolis & Necropolis

The next is Necropolis. Opposite the mountain of Rahmat, ten minutes driving to the north, proudly stands the Necropolis, the magnificent burial place of Achaemenid kings. The site also provides seven bas-reliefs dating back to Elamite and Sassanid period.

On the way we will have a few short stops in Pasargadae to visit the most important and majestic monuments there. The tomb of Cyrus the Great, the originator and the great founder of Achaemanian Emperor, (500 years BC) is the oldest historical tomb. The wonderful architecture of his tomb, the huge fertile land over there beside the brave personality of Cyrus the Great impressed the visitors. This Archeological environment was the worshiping place for the followers of several religions and still it is so. Followed by the relief of the winged man and get familiar with its historical elucidations some researchers gave specific theories regarding the relation between personality of Cyrus the Great and one of the prophets of Holy Book. By visiting this majestic tomb you can have your personal comment about it.

Abar Kouh, a historical city, is the place to historical sites and wonderful desert architecture. Old trees in any region are the symbol of archaism and evidence that appropriate weather and nice condition lead to long life. 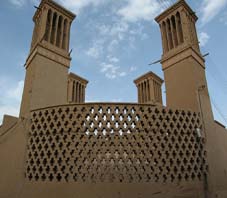 Mehriz is located 30 kilometers south of the city of Yazd. Mehriz consists of one central district and five village centers. According to historians, the name belongs to \"Mehrnegar\" the beloved daughter of Anoushirvan, the Sassanid King. Mehriz was known, during the late Sassanid era (4th century AD), as a natural pleasant area. One of The most important places to visit in Mehriz is Saryazd.

Yazd, the oldest adobe city in the world which is surrounded by the 4000m summit of Shirkooh and two majestic deserts of Iran, Dasht-e-Kavir and Kavir-e-Loot. This ancient city is furnished with mosques of stunning beauty. The co-existence of the splendid fire temples and the holy sites of different religions astonish every visitor.

Today we will drive to visit the village of Chak Chak, a sacred Zoroastrian mountain shrines which serves as a pilgrimage point for Zoroastrians. Our next stop is in Meybod, a major desert city in Yazd Province which is an ancient city goes back to pre-Islamic era and, hence, is home to many ancient monuments. We will visit Narin Ghal’e, one of the oldest castles in Iran which dates back to the Sassanid era. Chaparkhaneh and Abbasi Caravansary are some other historical buildings of this city. Finally return to Yazd and stay overnight in Yazd.

Day 12:
driving to Kashan via Abyaneh

Next, hop on to Kashan and visit Tabatabaiha and Borojerdiha houses and some other historical places specially chosen by our tour guide and be acquainted with the previous century’s architecture, the Qajar era. Stay overnight in Kashan. 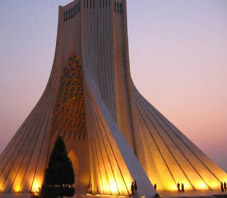 Today we will drive 246 km to Tehran on the way we will visit Qom and the National Desert Park. 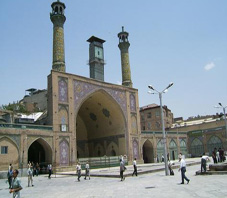