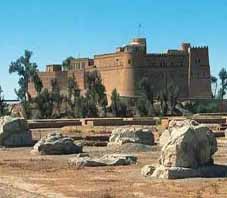 The ancient city of Shush (Susa), capital of Elam, was an important and flourishing city before the advent of Islam. Scientific excavations begun in 1891 A.D. by French archaeological missions, and continued until the present time, have brought to light many remains and relics of a pre-historic civilization. For instance copper objects and utensils discovered in the lowest stratum have resulted in ascribing this layer to the Copper Age, while the existence of yellow colored earthenware, decorated with animal motifs and geometric designs have evidenced the existence of a pottery-making industry in Iran, some 3000 to 2500 years before Christ.

In the second stratum of this Elamite city, a great number of objects made of stone, copper and other metals, and some cylinders made of bone have been discovered, while the higher strata have revealed kiln-fired, colored and decorated earthenware, metal arms, cylinders, copper pins, as well as human and animal figures.
The historic site of Susa is divided into four sections in respect to their antiquity and archaeological importance.

In all these sections, ample relics including pottery, arms, ornamental objects, metalwork, bronze articles, as well as tablets bearing traces of pictographic writing have been discovered. Similarly, numerous clay and stone tablets have been unearthed in Susa, which date back to 1700 B.C. The texts of these tablets are usually of documentary, legal or contractual nature.