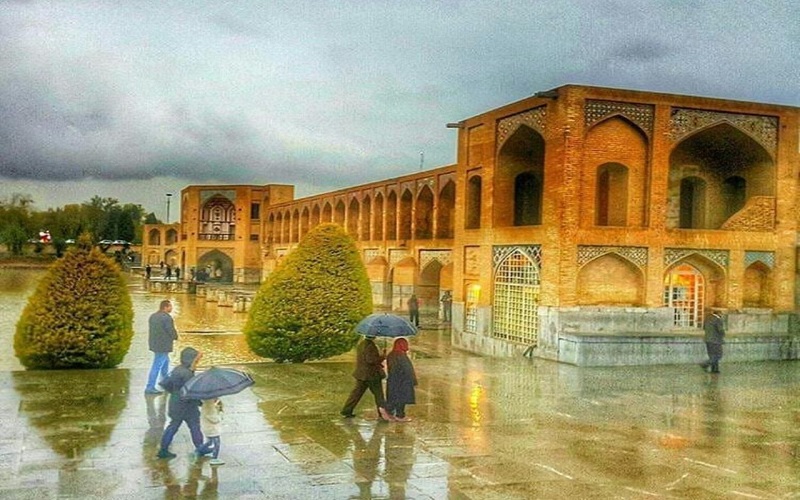 Pole Khaju or Kahju Bridge in Isfahan is located in the east of Sio-se-pol and in terms of strength, symmetry and architectural style, it is one of the unique bridges in Iran. This bridge was considered as one of the most beautiful bridges in the world in the Safavid era and is more famous than other Zayandeh Rood bridges due to its architecture and tiled decorations.

Kahju historic bridge was included in the list of national monuments of Iran on December 6, 1961.

This bridge was built in order of Shah Abbas II, the Persian Safavid King, in 1650.

Before building Khaju Bridge, however, there was another bridge in the same part of the city of Isfahan called Hassan Bey Bridge, which demolished by Shah Abbas’ order and they built a new bridge instead of the old one. The richness of history and fame of Khaju Bridge is universal!

Shah Abbas II ordered to build Khaju Bridge for different purposes. People used this bridge as a dam. In this way during the spring and summer each channels of bridge closed and it made artificial lake on the west side of it.

People used stored water for Gardening.
Shah Abbas, in order to be able to stay on the bridge for a short time with his family, considered a place called Shahneshin in the middle of the bridge. Throughout history, in addition to traveling along the Zayandeh Rood River, the bridge has been used to watch the king and his entourage racing, entertaining and entertaining.

There is an inscription in the southern part of the bridge which shows that Khaju Bridge was restored during the reign of Nasser al-Din Shah Qajar in 1290 AH.

Khaju Bridge is an architectural masterpiece from the Safavid era that according to some architectural sources, its function was not unlike Tehran Nature Bridge and instead of being just a place to cross, it was a great place to stop and enjoy the surroundings.

The building, which still exists today, is one of the most iconic monuments in Isfahan, which has very beautiful decorations.
Khaju Bridge plays an important role in the quality of land-water ratio. The position of the bridge is both hydraulically and structurally in perfect harmony with the natural ground; So that Khaju Bridge acts as an underground dam in front of Isfahan underground water Reservoir Lake.

Safavid era engineers solved the water problem of Isfahan city by constructing Khaju Bridge and creating delay facilities and dams, etc., and at the same time, by washing the soil and cultivating the land, they caused the sustainability and expansion of development.

The sharp shape of the bridge piers upstream minimizes the pressure of the river water on the bridge like a breakwater, and the shape of the pier steps downstream has the property that water flows from the piers during floods, thus Colliding with stairs loses its destructive energy.

In the passage section of Khaju Bridge, there are song arches and sweat domes, which are among the ancient Iranian arches and contribute to better bearing and stability of the bridge.
Reflective symmetry and proportion have been used in the design of Khaju Bridge; So that all the details are repeated with a regular rhythm and melody, and the spaces have the same shape and size with the same function, which are very beautiful and eye-catching.

One of the interesting points about Khaju Bridge is the different patterns and motifs on the capitals of the bridge spans, which have doubled its charm. Each of these designs is the work of one of the artists of Isfahan and therefore, they have been able to dazzle the eyes of every viewer for many years.

On both sides of Khajoo Bridge, there are beautiful stone lions that if you stand next to one of the lions and look at the eyes of the lion in front, the eyes of that lion will shine. Some believe that these two stone lions are a symbol of Bakhtiari tribes who bravely protect Isfahan and Zayandeh Rood.

It is interesting to know that a letter has been engraved on the body of these lions, which apparently was the beginning of the name of their sculptors. In addition, symbols of ancient sports can be seen on the bodies of these sculptures.

There is a building with various rooms and interesting paintings between each of western and eastern sides of the bridge. This building, called dais, was in fact a place for kings, princes, emirs, officials, and important people who came to Khaju Bridge and intended to take part in competitions such as swimming and boating, or they watched the matches. Of course, of all that glory today, there is only one stone bench left today that is king’s chair.

Pole Khaju or Kahju Bridge is located on Zayandeh Rood River in Isfahan and is about 1800 meters away from 33 bridges (Allah Verdi Khan Bridge). This bridge is located at the southern end of Chaharbagh Khajoo and at the eastern end of Kamaluddin Ismail Isfahani Street.