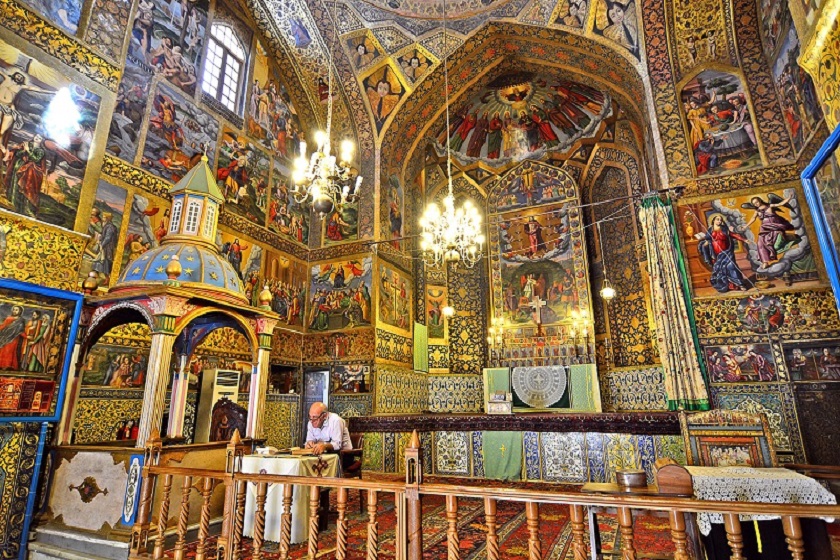 Isfahan is a historical city in the central of Iran. There are several monuments in the city, some of which are registered as UNESCO World Heritage Sites. The city is famous for its beautiful Iranian architecture, covered stairs, mosques and unique minarets. This has caused Isfahan to be called half of the world in popular culture. Other monuments of Isfahan include Minar Janban, Si-o- Se pol (33 briddges), Khajoo Bridge, Chehel Soton Palace, Aali Qapo Mansion, Vank Church and many other historical places. You will learn more about Vank Church in the following.

Vank Church is like a shining jewel in the center of Isfahan. Simple and beautiful architecture, unique paintings and the antiquity of Vank Church, distinguish this historical monument from other churches in Iran.

Like most of Isfahan attractions, Vank Cathedral was built during the rule of Shah Abbas, who moved the capital of the Persian Empire from Qazvin to Isfahan in 1598. The cathedral was established in 1606 for hundreds of thousands of Armenian deportees who came to Iran during the Ottoman war.

Today, Vank Church still has a strong position among the Armenians of Isfahan and is known all over the world. Vank Cathedral is located in Jolfa district, on the southern coast of Zayandehrud river, not far from the city center.
The architecture of Vank Church has an Iranian style, and like Iranian mosques, it has a huge dome. The biblical paintings of the life of Christ in this church   are of European and Italian style. On the north side of the church is a scene of the burial of Jesus Christ (pbuh). The interior paintings of this church, which cover its roof and high walls, are one of the most important and miraculous parts of Vank Church.

The two-story museum on the northern part of the courtyard contains exhibits of some of the earliest books ever printed with one of the first printing devices in Middle East.

Other Interesting Valuable Items in This Museum are:

The smallest scripture in the world

A short piece of hair, measuring only about 0.004-inch-thick, with written words on it in Armenian

There is a library with more than 10,000 books next to the museum.

The gravestones in this Cathedral belong to priests, Russian and British consults, politicians, doctors, and people who contributed to the process of building and completing the church.

Where to Eat near Vank Cathedral?

Armenian district, where Vank Cathedral is located, is a popular tourist destination and thus has lots of excellent options for lunch or dinner. One of the best-rated restaurants is near the church.

If you want to stay not far from Vank Cathedral, there is the 2-star Jolfa Hotel in a 1-minute walk from the church. For a luxury stay, we recommend 5-star Parsian Kowsar Hotel and Abbasi Hotel.