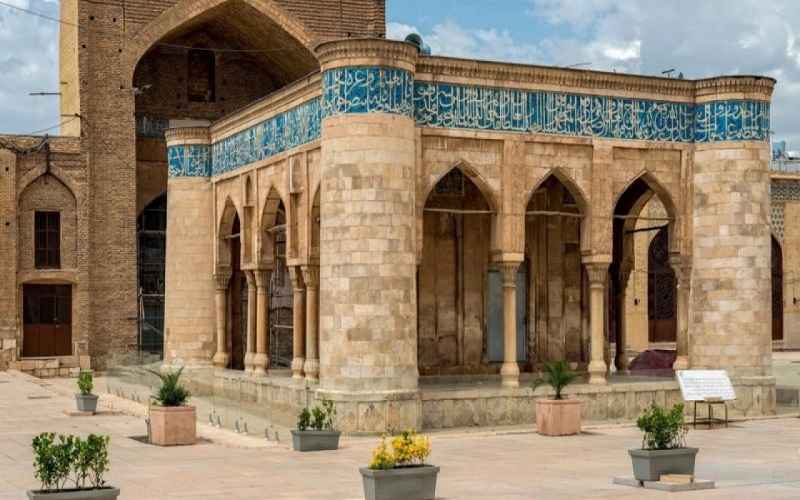 Shiraz, which is located in the East of Shahcheragh shrine and is a

relic of the Saffarid Dynasty and its famous king, Omar Laith

Saffari. This mosque was built on an old building (probably a fire temple).

Atiq Jame Mosque has a high building with several

Shabestan or prayer halls that have been repaired and rebuilt

and Safavids). The Atiq Mosque has valuable architectural features,

Imams, the head of this door is made of Moqarnas tile, and four

decorative inscription with the names of the Twelve Imams are

installed in the two-sided. On the same side, the pearl arch, which

is considered a high-rise arch, with a roof made of Mogharnas brick

has given a beautiful appearance to the mosque. The western side

of the Atiq Jame Mosque has beautiful porticos with several

entrances, which the entrance door of Shah Cheragh is on the west

side of the mosque.

other remarkable parts of this mosque.

Other spaces of the mosque include the Khodakhaneh (means “The

century. It is also called Second Kaaba or Time Gateway. It has a

In Khodaye Khane, there is a 30-part Quran that each part includes

a chapter and belongs to the reign of King Ismail Safavi.

rectangular mansion that has a circular column in each of its

The inscription of this mansion is a valuable example of Iranian

calligraphy and includes Arabic poems in the honor of the Qur'an .

This inscription is the work of Pir Yahya Jamali Sufi, one of the

famous calligraphers of the eighth century AH. This mansion, which

is made of stone and plaster, was renovated only once during the

reconstruction of the Atiq Mosque in 1315.

tours during your trip to Shiraz. The architecture and the spiritual

atmosphere of the mosque make an unforgettable memory for the

Atiq mosque is always open for visitors(from morning to night).