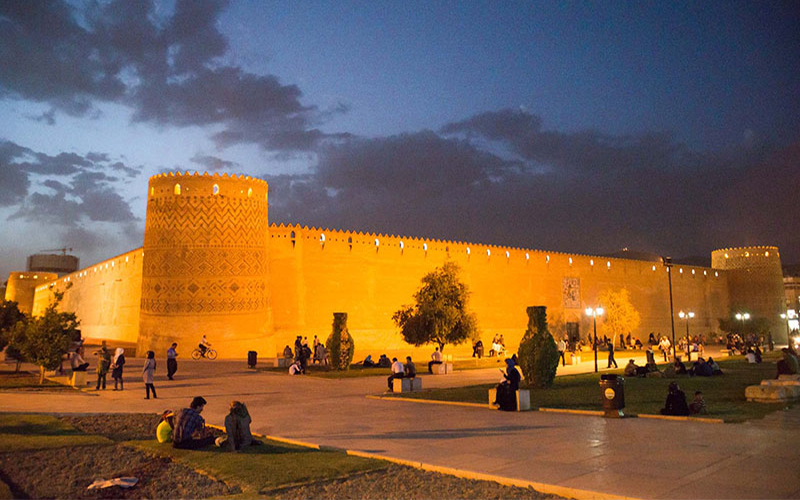 The Karim Khan Citadel or Arg-e Karim Khan is a Castle located in downtown Shiraz.
It was constructed in 1766 when Zand Dynasty was ruling the country.

Karim Khan-e-Zand gathered the most professional architects and artists of the time and bought the high-quality building materials from other cities and abroad in order to build this really fantastic structure for him.

It used to be the main residential palace of Karim Khan-e-Zand (the first king of Zandiyeh) and his dynasty in Shiraz.
It shall be well preserved because it was the home of Karim Khan and the military center of the dynasty, therefore the design of the citadel combines military and residential architecture.
It surrounded by impenetrable high brick walls and four circular towers on the corners that the height of each tower is 14 meters.
Architecturally this citadel is a large and lofty rectangular building that is spread over 12,800 square meters.

Residential parts of this amazing citadel are located in the northern, western, and southern parts of the castle.
There is a hall with two stone pillars and six rooms on both sides, that all of the rooms are connected together from inside.
Also in different corners, there are some rooms with a higher ceiling that used as a resting place for the Shah (King) and known as Shahneshin.
The main Shahneshin is located in the western corner and there is a pool in front of each Shahneshin hall that was used during the summer and the water of which was provided by an aqueduct. However, today the aqueducts have been dried up. The northern Shahneshin was used in winter.

Most of the significant changes in Shiraz were made during Shiraz selected as the capital city of Karim Khan Zand kingdom.
He had a great idea about the beautification of the city and gradually built several awesome monuments in Shiraz.

This place was changed to be a jail and was used as a prison for thirty-five years until 1971.

In 1972, Karim Khan Citadel was registered in the National Heritage of Iran.

Some parts of this valuable building has been rebuilt by Houshang Esfandiyari, the supervisor of the restoration of the Karim Khan Citadel.

+Karimkhan citadel Opening hours are as below: