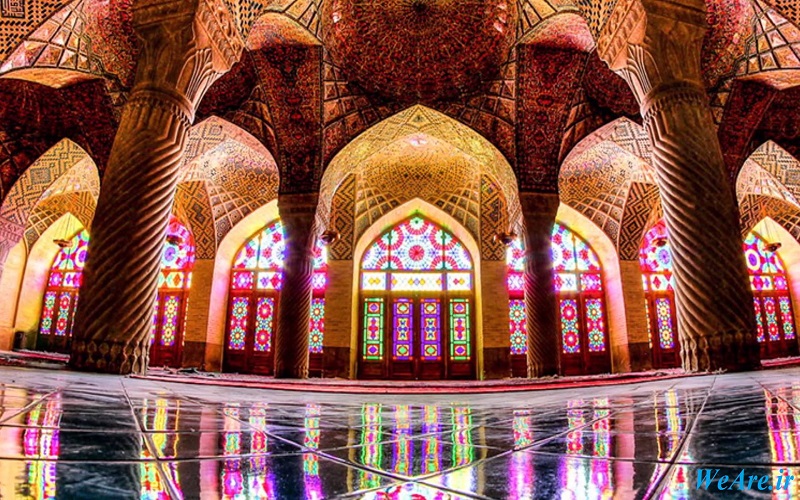 The Nasir al-Mulk Mosque that also known popularly as the Pink Mosque due to the usage of a considerable number of pink-colored tiles for its interior design. Beauty, peace, and glory have all gathered in Nasir al Mulk Mosque.

This surreal mosque is located in the beautiful city of Shiraz near the Shah-cheragh Shrine. This mosque was built from 1876 to 1888 (during 12 years) by the order of one of the Qajar Dynasty lords (Mirza Hasan Ali Nasir-ol-molk). The beautiful structure was designed by Muhammad Hasan-e-Memar and Muhammad Reza Kashi Paz-e-Shirazi that are both great names in Iranian architecture.

Pink Mosque, Rainbow Mosque, Mosque of colors, and Kaleidoscope Mosque all are the different interpretations of visitors from this incomparable site. The beautiful ceiling of this site is designed with colorful tiles in a beautifully structured arch style. The other amazing thing is an inscription, written on a marble stone. These are the poems of Shoorideh Shirazi, which were on the occasion of finishing the mosque.

At the beginning of your getting into this wonderful place, you will see the brick-made structures all around it, and like any other traditional Persian architecture, you will see a big fountain in the middle of its beautiful yard. This dazzling mosque includes two eastern and western Shabestans(bedchambers or prayer halls). Shabestan is a special area for prayers in the mosques which was used during winter and summer.

The unique architecture of this mosque makes the atmosphere cool in summer and hot in winter. The western Shabestan is the most beautiful part of the mosque that you can see the most eye-catching features there. It consists of 12 carved columns, stained glass windows, and designed ceiling and walls with colorful tiles. As well it has seven wooden doors with stained glass. Likewise, the eastern Shabestan consists of 7 columns and was used in winter. Its design is pretty simple and basically not comparable to the west Shabestan. In the northern iwan, there is an arch which known as “Morvarid” and designed with fine Muqarnas.

And here you can see panj kaseh (five concaves) which creates a breathtaking view on the roof. The arts of tiling and painting in shabestans, splendid decorations of Mihrab, the harmony among columns, the play of light and colors, and fantastic geometric patterns all dazzle the eyes of visitors. Nasir al-Mulk Mosque has been registered as one of the national heritage sites of Iran and annually attracts many tourists to Iran. This mosque still continues to be used as a place for prayers. It's definitely a must-see place in the morning (about 8 to 9 am)when the sun spreads its light.

Besides the religious point of this mosque, it has a spiritual atmosphere inside that. Watching the light shine through the Nasir Al-Mulk Mosque is an Iran bucket list-worthy experience, something you definitely cannot omit from your Iran itinerary.

+Nasir al Mulk Mosque Opening hours are as below: