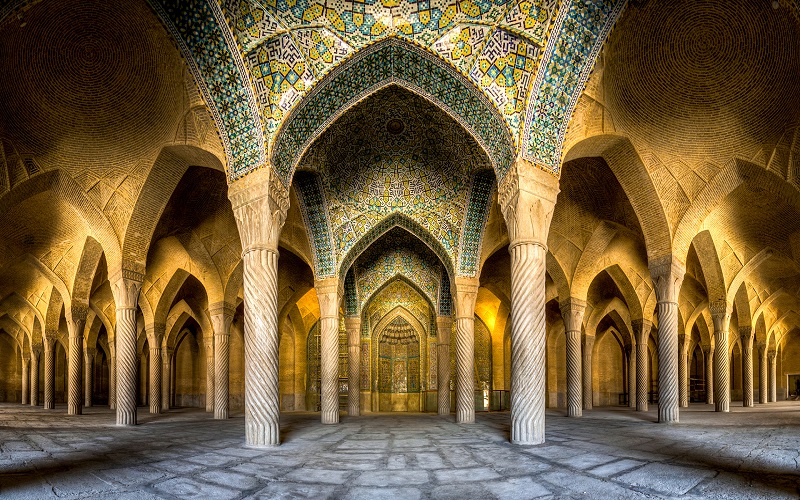 There are places of worship throughout the world that can claim to be extraordinarily beautiful in design and form. The Vakil Mosque in Shiraz, southern Iran, situated to the west of the Vakil Bazaar is just such a holy site.

It’s not just any mosque, it’s one of the best. Vakil Mosque is one of the life-changing destinations in the world for those who want to get different experiences. The Vakil Mosque is one of the most remarkable monuments of the Zand dynasty and shines brightly like a diamond in the heart of Shiraz, due to its dazzling architecture. The mosque constructed for public use so ordinary people could do their daily religious duties and say their prayers. Vakil Mosque, Vakil Bazaar, and Bath are three monuments from the Zand dynasty, which create part of the city's identity.

As mentioned above, the Vakil Mosque was established in Shiraz, between the Vakil Bath and the Vakil Bazaar on Karim Khan Zand’s orders. This mosque lies in the western part of the Vakil Bazaar and located about 100 meters away from the Vakil Bath. The vastness of this mosque, along with the exquisite architectural features, has made it one of the most popular monuments in Shiraz.

Vakil Mosque with an area over 11,000 square meters, adorable architecture, superb carvings, sculpted inscriptions to the Nastaliq, Naskh and Thuluth scripts, and its colorful tile works will be praised and appreciated by every visitor.

At first glance, you will notice the tangible harmony between different parts of this mosque. It’s interesting to know that,this mosque has two Iwans , two southern and eastern Shabestan, entrance gate, courtyard, Mihrab, and Marble Minbar. Although the entire mosque has an impressive design, three magnificent vaults are something special and rarely seen in the world. Your artistic appreciation will be further strengthened when you notice the Koranic verses right on the entrance gate written in Sols and Nosakh scripts. The carving and dedication of the builders to their craft can leave you gasping in wonder at the intricacy of their work. Every surface that could be molded into something else with hammer and chisel seems to have been worked on, and the overall effect is quite something.