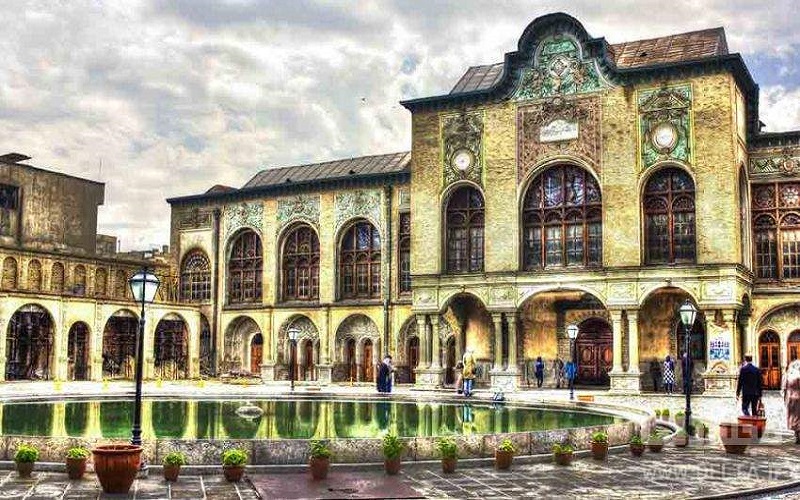 In this article, we will explain about Masoudiyeh mansion:

Masoudiyeh Mansion is one of the historical monuments of old Tehran and the Qajar period. This building is very important and valuable in terms of architecture as well as the historical events that took place in it. Every day, many domestic and foreign tourists come to this mansion to see its beautiful architecture and spend some time exploring it and away from the bustle of the city for a moment.

Masoudiyeh Mansion is one of the historical monuments of old Tehran and the Qajar period. This building is very important and valuable in terms of architecture as well as the historical events that took place in it. Every day, many domestic and foreign tourists come to this mansion to see its beautiful architecture and spend some time exploring it and away from the bustle of the city for a moment.

Masoudieh Mansion is located near Baharestan Square of Tehran and is amongst some of the most exquisite historical buildings of old Tehran that has been completely restored. From influential days of Qajar era to events of Persian Constitutional Revolution, this mansion has witnessed some of the most important days and events of the contemporary history of Iran.

Masoudieh Mansion was in fact the same as Nezamieh Garden that Mirza Agha Khan Nouri built for his son Nezam ol-Molk in 1854. But the mansion was built by the order of Zell-e Soltan, one of the Naser al-Din Shah Qajar’s sons. Zell-e Soltan ordered his servant, Reza Qoli Khan titled as Seraj ol-Molk, to build the mansion.

The construction began in 1873 and ended in 1878. The structure is located in the southeast of Negarestan Garden and was a part of Nezamieh Garden. It is possible that the mansion was built as a substitute for Golestan Palace. In fact, it looks like the Marble Throne and Emarat e Badgir of that palace. During Pahalvi dynasty, Reza Shah purchased this building from Zell-e Soltan and gave it to the government. Masoudieh Mansion has functioned as a military school and Ministry of Education. After the Iranian Revolution, it went under the administration of Cultural Heritage, Handicrafts and Tourism Organization of Iran.

The garden of the mansion was at first as vast as forty thousand square meters, from which only half of a hectare remains today. Two main structures of Masoudieh Mansion are the courtroom and the sitting room. Other buildings have been constructed next to them such as Miansaray-e Seyed Javadi, Seyed Javadi Building, Miansaray-e Moshiri, Moshir ol-Doleh building, Miansaray-e Khalvat, walking path entrance gateway, gateway for carriages, and the garden of courtroom. Each of these structures has been decorated with stucco, woodworking, tiles, calligraphy, mural painting and other techniques.

Today Masoudieh Mansion has turned into a cultural center in the heart of Tehran. Occasionally, festivals and art exhibitions are held there, too.

The first construction that visitors can see entering the complex, is Divankhaneh Palace. This building represents transparency, lightness, and openness – new principles of Iranian architecture. Gridded windows provide enough amount of fresh air and sunlight into the rooms, and natural patterns, floral forms, and landscape ornaments bring in a fresh, European-style image of the palace. That makes Masoudieh Mansion a prominent example of Qajar architecture.

Masoudieh Palace is located in the center of Tehran, in a couple of minutes walking from Mellat Metro Station. You can use the advantage of the central location and also visit Negarestan Garden, National Jewelry Museum, Ebrat Museum, and Bagh-e Melli since they are located within walking distance of Masoudieh Palace.

Due to its central location, Masoudieh Palace has many hotels around it. You can choose Shahriar Hotel- Escan Hotel and Ferdowsi Hotel for your residence.

You can have several options for lunch Cafe Tilit offers traditional Persian cuisine and is famous for a variety of Dizi – unique Iranian stew. Don’t worry if you prefer to have a well known European menu places like Ivan Cafe offer burgers, pasta, pizza, coffee, and desserts.