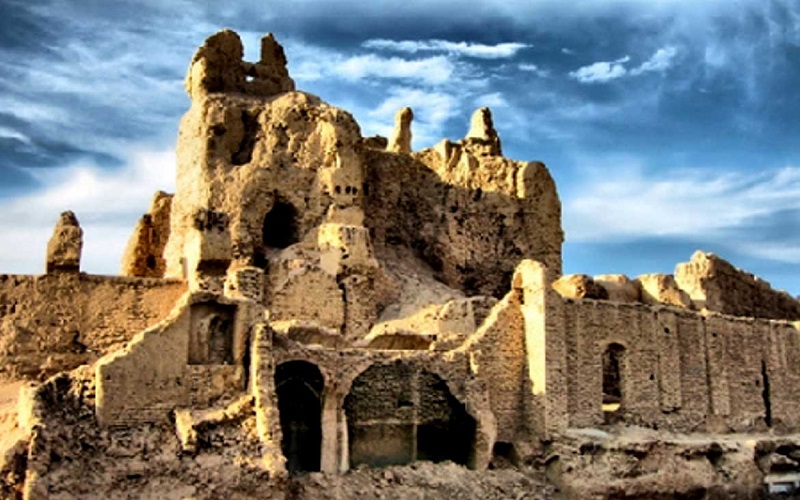 Chak Chak Shrine is one of the most mysterious places in Iran, which has existed for almost 1400 years. Every year, it attracts many people to visit and perhaps discover the real secrets of the Yazd Chak Chak shrine.

Yazd province is home to many Zoroastrians around the world and Chak Chak Temple is one of the most famous and important Zoroastrian shrines.
Here we explain to you about the details of the mysteries, stories and also the architecture of this spectacular work so that you can get more acquainted with the Chak Chak shrine while traveling with Key2Persia. Because by knowing more about the sights, your trip will be more attractive.

The location of this shrine and the presence of lush trees and springs in the middle of a desert land depicts one of the miracles of creation. Some call this collection cryptic.
Various stories have been told about the Chak Chak shrine from hundreds of years ago. Each is stated on a specific basis, which has made this shrine very mysterious.

It is narrated that during the reign of Yazdgerd III (the last Sassanid king) after the Arab invasion of Iran, which caused a lot of chaos and insecurity, It forced him to think of a way to keep himself and his family safe. Yazd Gerd, after examining the situation and possibilities, decided to move from Madain to Yazd and ordered to construct a strong city with a fence, tower and moat to protect him and his family, as well as the people of that city.
Yazdgerd was a follower of Zoroaster religion and during his reign, the religion of Zoroaster was very common and popular. He ordered to construct many different buildings that were related to Zoroaster religion. That's why you see many works of Zoroastrianism in Yazd.

One of the goals of the Arabs who invaded Iran was to find Yazdgerd as the king of Iran, and they searched for him city by city. Therefore, Yazdgerd had to go to war with the Arabs. But he failed to achieve victory and inevitably left for Khorasan province. Unfortunately, a miller killed him in Khorasan, and the news of the death of the Sassanid king reached Yazd. The Yazdgerd family was forced to separate from each other in order to escape the enemies, and each of them went to a corner of the surrounding lands.
Among the children of Yazdgar, Hormozan and Shahrbanu, who were the eldest son and daughter of Yazdgerd, were arrested and sent to Saudi Arabia as slaves.

ParsBanoo and Mehrbanoo rushed to the northwest of Yazd, but near Arjanan (a village in the Aqda section of Ardakan city) they said goodbye to each other and separated so that they would be safe and no one would suspect them.
Mehrbanoo set out for the city of Aqda but she died of starvation and suffering on the way, and her body was buried in the corner of a garden in Aqda, which is known as Mehr Farm now. The people of this region know it as the place of MehrBanoo and keep its memory alive by lighting candles in special ceremonies.
ParsBanoo escapes to the west of Aqda and reaches a village called Zarjou and it is said that she hides in the mountains. And according to this narration, today there is a shrine in this place, that the stone gap exist there in which is known as the place where ParsBanoo disappeared.
Ardeshir, the youngest son of Yazdgerd, went to the eastern parts of Yazd with his mother Katayoun, and People did not find any information about them. It is said that Katayoun disappeared behind a fence in a well that today is known as the shrine of Setia Pir, which is located in the Yazd city and you can visit it.
Ardeshir, also disappeared in the middle of the mountains in the east of Yazd, in a place that is today called Narestaneh shrine.
Naz Banoo, another daughter of Yazdgerd, moves to the south of Yazd and It is said that After a while, she disappeared in Tijang Mountain. As a memorial, a shrine has been built in that place that is called Pir Naraki Shrine.
NikBanoo and Morvarid (the loyal crew of the Yazdgerd family), moved together but were forced to separate in the desert. Because of being hidden from the enemies, each went in one direction. Morvarid disappeared in a mountain 17 km far from Ardakan, which is known as Harisht Mount today and has a special sanctity among Zoroastrians.
About Nikbanoo, it is said that on the way to a mountain, 37 km east of Ardakan, she encountered the enemy army. Therefore, she climbed the high and dry mountain in a hurry with fear and crying. But the enemy came so close to her that they could easily have captured her. At this historic moment, this chaste lady sighed and looked at the mountain and said: Embrace me like a kind mother and save me from my enemies…
With these words, a rift arised in the mountain, pulled NikBanoo in and disappeared her from view.
The enemy scared after seeing this and found no other way except escaping from that area.
It is said that later a shepherd saw NikBanoo in a dream and she told him to build the Chak Chak shrine to keep her memory alive. The shepherd shares the story of his dream with the Zoroastrian elders, and they begin to build this shrine together.
Over the years, it has been transformed into its current form and has become one of the famous places of worship for Zoroastrians.

Every year, from June 15 to 18, Zoroastrians from all over the world gather in this shrine for four days to worship. They sing happy songs and pray in these days. Special rituals that performed in this place include reciting the Avesta(Zoroastrian Bible) and praying to Ahura Mazda, cooking a kind of soup(Ash) and other foods for vows, and helping the poor.
In addition to performing the rituals, the followers of this religion are also aware of each other.
Also, Zoroastrian religious ceremonies are held in this place.
Every year in October, another glorious ceremony, Mehregan festival, is held in this shrine and on the occasion of Mehregan celebration, many Zoroastrians gather in this place and the voice of joy is heard in this holy place.

Architectural structure of Chak Chak:
Chak Chak Shrine includes the main area where a set of buildings and a fire temple are built in a stepped manner. This complex has 5 irregular floors, that the roof of each floor is the courtyard of the upper floor, and this architectural structure continues to the highest point of the mountain. And it ends at the most important part of the shrine, the fire temple.
You have to climb a large number of steps built into the mountain, Which may be a kind of sign of sympathy and remind us the trouble of going up on that day for NikBanoo.
From the beginning of the stairs to reach the shrine, on the surrounding walls, you will see inscriptions from the Avesta(Zoroastrian Bible). One of which is written is the following sentence: There is one way in the world and That is the way of redemption. When you reach the top of the stairs, you will see the building of the fire temple or the shrine of Chak Chak.
To enter the fire temple, you must pass through a golden metal door, which has carved the shape of an Achaemenid soldier with a spear on it. Inside the covered space of the shrine is a small building with a stone roof and in the middle of it a chandelier is installed to provide light to the shrine. The interesting thing is that the uneven shape of the walls, which are naturally formed, still remain intact and remind you the past and historical days of Yazd. If you look down, the floor covering is made of special marble that it's a little wet due to the dripping water that comes from the heart of the mountain, which gives you a special feeling.
Good to know that in order to enter the shrine, everyone must wear a white hat, take off their shoes and enter with special slippers.

Its architecture is a stone building in the heart of the mountain and at first glance it looks like the mouth of a cave.

Inside this shrine there's a fire that Zoroastrians always try to keep it bright and warm to perform various Zoroastrian rituals properly with a special warmth. Next to it, there are containers on the floor to collect water, which is used to bless the pilgrims.
Also, there is an old sycamore tree which is more than a thousand years old. People believe that this tree is the walking stick of Nikbanoo which she hit the mountain crevice with it and then it turned green due to the fresh water dripping from the mountain crevice. This tree is also remembered during various ceremonies.

The best time to travel:
In order to visit the Chak Chak Shrine in Yazd, you can travel in all seasons, but due to the desert location of this place, it is better to go in spring and autumn, when the temperature is moderate.