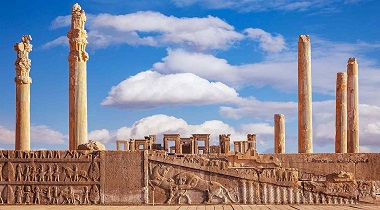 A world of ancient mystery is located in Iran, with some historic sites dating back (over) to 7000 years, far before (civilization of) the Persian Empire and its capital, Persepolis come into existence.

Persepolis is no doubt the main attraction that lures tourists to Iran. Located about 70 kilometers (43.5 miles) outside of the modern city of Shiraz. These ancient ruins served as the capital of the Persian Empire, which spanned across Northern Africa, India, and southern Europe at the height of its power between 500 and 350 BC. Referred to locally as Takht-e Jamshid and established by King Cyrus the Great in the 6th century BC and finished by his son Cambyses II and grandson Darius over the course of 150 years, Persepolis means “city of Persians.” The architecture was to be indicative of its supremacy; therefore, buildings such as the Imperial Treasury, Apadana Palace, and others were constructed.

Bas-reliefs are among the highlights of this archaeological wonder. Lotus flowers and cypress trees frequently appear throughout the site. Other notable carvings represent nobles, dignitaries, and envoys of Ethiopian, Tajik, Indian, Egyptian, and Armenian nationalities, among others, who visited the capital bearing tributes for the King of Kings. Every detail of their face, hair, curly beards, and clothes is both mind-boggling and connected to the present in appearance.

Apadana is one of the oldest palaces in Persepolis which was built in order of Darius the Great, and its function was mainly for grand ceremonies and celebrations. Apadana means a grand hall with pillars. Many believe that this is the best palace in Persepolis.

Tachar means a winter house. This palace was also built to Darius the Great, as it is written on one of the cravings in this place: “I Darius, built this Tachar.” There was probably a garden on the southern part of this palace. Also, there is an inscription in three languages (Elamite, Persian, and Babylon) by King Xerxes in the southern doorway.

Hadish was the Personal Palace of King Xerxes and it is believed that the grand arson was started here. Hadish means a place in height, and it was also the name of Xerxes ‘s second wife.

The Queen’s Palace was built by King Xerxes and it is relatively lower than other palaces in Persepolis. Now this place is used as Persepolis Museum.

H palace is located on the southwest of Hadish Palace and it is almost completely ruined.

The Achaemenes’ kings used Se-Dar Palace as a place for more informal and less critical meetings. On this palace staircase, you can see cravings of Persian nobles.

Showra palace means the council palace. Probably the king used Showra Palace to discuss with elders. In the Council Palace, two human heads are not elsewhere and that human beings are the symbol of thought.

Persepolis is not only a symbol of Iran, but its significance and grandeur are embedded in the psyche of Iranian people today. For this population, it’s not just ruins of a forgotten empire. It’s the place where the Cyrus Cylinder, the first charter of human rights that expressed tolerance and equality for all religions, races, and languages, was recorded. (It is now in the British Museum).

Despite the negative attention Iran receives in mass media, Persepolis continues to act as a reminder of one of the most powerful empires and is a source of pride for Iranians who remember that they are descendants of these past great leaders and this most civil of ancient civilizations.

You could even say that it serves as an aspiration for Iran to once again become a model society and rise to the top.

+Persepolis Opening hours are as bellow: