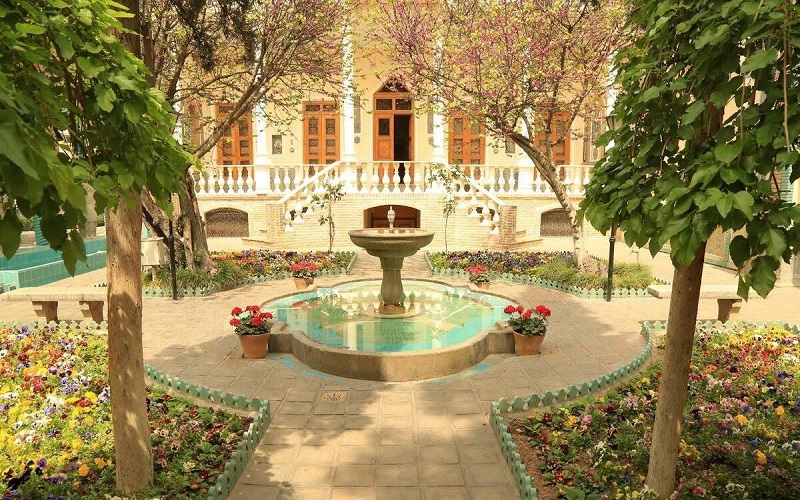 The Moghadam Museum, the incredible house in Tehran. It is a historic to worth a visit.
Moghadam Museum is known as one of the most valuable and priceless museums where visitors can find many treasured items such as gems, textiles, paintings, pieces of furniture, and prehistoric objects in different parts.

The history of Moghadam house dates back to the Qajar dynasty , around 200 years ago.
Its owner was Ehtesab-ol-Molk, one of the authorities of Nasseredin Shah. After his death,
the house was inherited by his son- Mohsen Moghadam- who was studying art and archeology in Europe.
When he came back, he lived in this house with his French wife for a long time.
Mohsen Moghadam was a painter, a great archaeologist, and the professor at Tehran
University. The couple both loved history and culture and they dedicated life to collecting
historical objects from around the world and displaying them in their house. In 1972, Mohsen
and Salma bequeathed the family house and all its treasure to Tehran University.
Along with the special objects exhibited in Moqadam Museum, many photos in the house
represent the life of Mohsen and Salma to add a good homelike feeling to the museum.
Moghadam house like all the historic houses in Iran, has two parts: inner par or andarooni and
the outer part or birooni.

Mohhadam house is a perfect sample of Iranian traditional architecture. The house is decorated
with colorful and beautiful tiles, columns and arches.
There are exclusive valuable golden tiles, installed in walls to be protected and preserved.
These tiles are absolutely unique in the world. The outside or the garden is full of tress and has
a wonderful atmosphere during spring. Iranian architectural principles of a Persian garden in this
mansion is one of the kind. The residency used to be the house of Mohammad Taqi Khan.
Ehtesab-al Molk, one of the most famous members of the Qajar court.
One of the most important features of Moghdam house museum is the relative homograph
Betwenn the architectural spaces and historic arts that used in its interior design.

If you are tired of Tehran’s hassle and wish for some Persian style serenity, this hidden paradise
would defiantly fit your purpose while enjoying the history.

Address:
The museum is located in the heart of Tehran, within walking distance from Hassan Abad metro station and Alborz BRT bus stop.
Address: Imam Khomeini Street, between Sheikh Hadi and Vali-asr Street