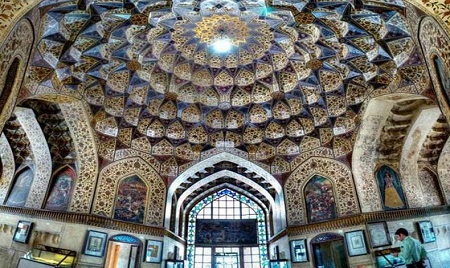 Shiraz is a city with pleasant weather that was once the capital of powerful governments like the Achaemenid Empire. So there are many antiquities in this city. Pars Museum is one of the oldest and most prominent Museum in Iran located in old Nazar Garden, one of the most beautiful and lush garden and considered as one the most spectacular tourist attractions in Shiraz.

In addition to collection of valuable historical monuments, there is a historic mansion in Pars Museum that its architecture and design is so beautiful and glorious that most of tourists attracted to watching its exterior view of Kolah-e Farangi and inner amazing drawings.

Under the influence of European arts in Iran, the pavilion was named Kolah-e Farangi (foreign
hat) which is also the name used for similar monuments and edifices.

The Shape of Building is octagonal from outside. The exterior is decorated by Beautiful tiles decorated with
Floral patterns and tree of life design where lots of birds and flowers are drawed in delicate harmony.

The octagonal building was the place in where special guests were hosted during the Zand
Dynasty of Iran. It was also used for holding official ceremonies.

Some of the fascinating water-color paintings of Suratgar-e-Shirazy, the well-known Zand period artist, are on display here. There is a Collection of 30 volumes of Quran with Yahya al-jamali alsufi's manuscript.

Also some very interesting armors and cold weapons (daggers and swords) are on display.

The burial place of Karim Khan Zand is also here at this pavilion. His tomb stone can be seen inside as well