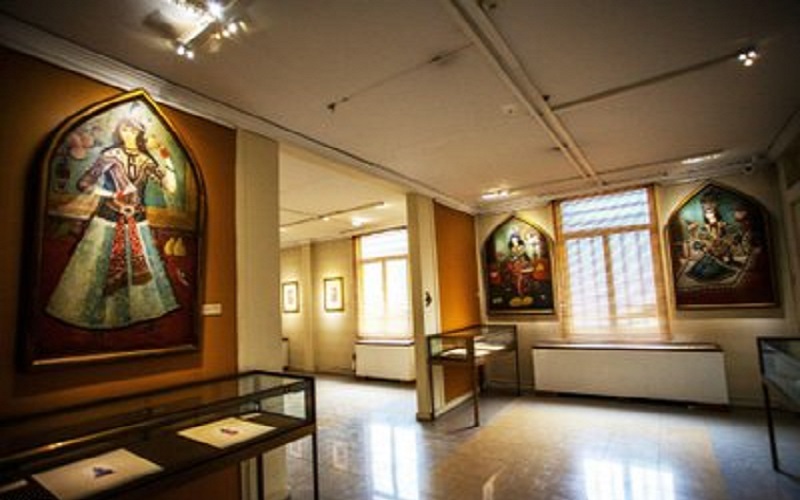 If you are also interested in beautiful Iranian paintings, manuscripts, and works of art and history, Reza Abbasi Museum is one of the museums in the country that offers such things.
This museum was opened in 1977 and is registered as a memorial to the famous Safavid painter from Kashan, Reza Abbasi.

The building of this museum actually belonged to an exhibition of furniture and home decoration, which was considered by the authorities at the time due to its architectural features as well as its location and was purchased from its original owner. The Reza Abbasi Museum was officially opened in October 1977 by Farah Pahlavi, but unfortunately, it was closed a year later in November 1978. During this period, from 1976 to 1979, the museum was managed by Aydin Aghdashloo. At the end of 1979, the museum was reopened again after changes in the interior layout and the expansion of the exhibition space. In 1363, due to internal problems in the museum, it was closed again and reopened a year later. Of course, this reopening did not last long, and again the museum was closed for the second time in the same year.

Finally, on February 6, 2000, after many reconstructions, the Reza Abbasi Museum began to work for the fifth time. Currently, this spectacular place is managed by the Cultural Heritage, Tourism, and Handicrafts Organization. Today, this museum continues its activities as one of the most complete historical and cultural collections in the country.

Reza Abbasi Museum is one of the richest historical and cultural collections in the country, so it can be called a small example of the Museum of Ancient Iran. Among the spectacular collections that you will see in this museum is related to the second millennium BC to the early twentieth century and the Qajar period. The Reza Abbasi Museum holds about 50,000 different types of objects, but unfortunately in the museum halls it is only possible to display 700 works, and other works sometimes have the opportunity in the temporary exhibition section of the building to present themselves to the eyes of those interested.

The building of Reza Abbasi Museum has three floors and it is visited from the upper floors to the lower floors. So that the arrangement of objects based on history is also from the upper floors to the lower ones. In addition, the Reza Abbasi Museum has various halls, including the Pre-Islamic Hall on the third floor, the Islamic Arts Halls 1 and 2 on the second floor, the Painting and Calligraphy Hall on the first floor, and the Temporary Exhibition Hall on The ground floor is located.

On the third floor of this museum, Iranian works from prehistoric and pre-Islamic periods, the gradual expansion of art and profession, as well as the adaptation of materials to the needs of human life are on display. Most of the objects in this section are inspired by shapes and designs modeled on the animals of the environment. In addition, works from the Achaemenid, Parthian, and Sassanid periods have been exhibited, which refer to the development of technical knowledge and communication between artisans and artists. Carefully in the metalwork done in the Sassanid period, you will notice that the craftsmen of that period were fully acquainted with the physical properties of metals so that they could change them according to their designs in any way they wanted.

Islamic period halls 1 and 2 of the museum on the second floor:
Pottery, metal objects, elements of the architecture of that period, jewelry, and textiles from the Seljuk, Timurid, and Safavid periods are presented in these two halls. The Qajar period is also introduced in this section by its pens and oil boxes.

Museum Calligraphy Hall on the first floor:
Calligraphy as one of the highest achievements of the Islamic period is displayed in this hall. In this section, you can see the different stages of calligraphy evolution among the writings of the third, Mohaghegh, Naskh, and Nastaliq calligraphy, and also get acquainted with the art of bookmaking at that time.

Museum Painting Hall on the first floor:
In this part of the first floor of Reza Abbasi Museum, a valuable treasure about the painting tradition in the Islamic period is exhibited, the oldest example of which is a leaf from Shahnameh of Demut, which belongs to the middle of the eighth century AH. Also, you can see the stages of painting growth and evolution up to the fourteenth century AH in this section of the hall. Among the important items in this collection, one can follow paintings from Shiraz, Tabriz, and Herat schools. In addition, a number of Sadegh Hedayat's personal belongings are kept in the Reza Abbasi Museum, although they are in the museum's repository and cannot be visited.

The library is also part of the Reza Abbasi Museum, which is located on the third floor and contains about 6,000 books. This number of ancient books shows a rich collection of the history and culture of Iran. In addition, there are several old Persian newspapers and magazines in it and it can be used as a valuable source for research by those interested in the history of art, archeology, and culture of Iran.