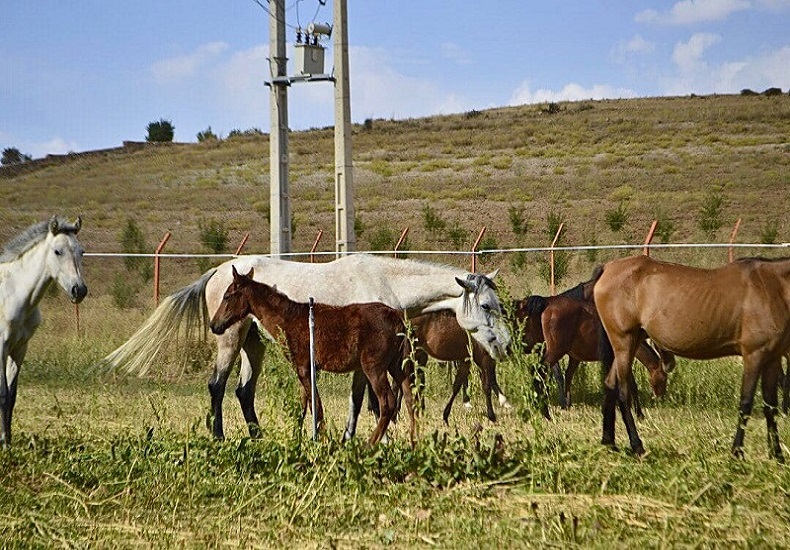 History of horses in Iran

Did you know that?

The horses have 205 bones, they can sleep standing or lying down, they have one of the largest eyes in mammals, Due to the location of their eyes on both sides of the head, they have supernatural Peripheral vision.

Their speed reaches about 50 kilometers per hours. They are able to run very soon after birth. And finally their foals can stand just two hours after their birth.

Let's take a brief look at the history of horses in Iran:

For Cyrus, the horses were so important that the number of his horses exceeded 120,000 heads per year. All of these horses had individual pedigrees and identities and were generally used in army cavalry. At that time, according to the laws, every Iranian had to learn horseback riding.

Based on the geographical area, Persian native horses have different characteristics. The native horse of the Iranian plateau is not very large in size, but it is very strong. Throughout history, Persian horses have always been used for difficult tasks or crossing long and rough terrain. The best breeds of Iranian horses include Kurdish, Qarabagh, Turkmen, Arab, Qashqai, Caspian, Bakhtiari, Sistani and Taleshi horses. Follow us to examine the characteristics of each of the Iranian horse breeds:

The height of Caspian horses is between 100 and 120 cm, although better feeding conditions outside of Iran have often led to the birth of taller specimens. They are short and elongated with arched foreheads, big eyes and small ears. The small snout and big nostrils are at the bottom. This breed generally has a slender body and graceful neck with sloping shoulders and a long and beautiful tail.

There are currently less than 1,000 Qarabagh horses. This means that they are endangered. This breed of horse is not tall, but usually theirs height is between 145 and 150 cm. In terms of the color of the Qarabagh horses, chestnuts or bays are seen in golden color.

The Kurdish horse is another breed of Iranian horse that dates back to ancient Iran. The Kurdish race has unparalleled endurance and beauty. This has led to significant victories in polo competitions. This breed of horse is more scattered in Kermanshah, West Azerbaijan and part of Zanjan.

Arabian horse is one of the breeds of Iranian horse, which in some cases is also called purebred horse. This breed is easy to identify due to its distinctive head shape and long tail. The height of this horses are between 142 and 154 cm and weigh between 350 and 450 kg. The Arabian horse is a warm-blooded, intelligent, shrewd and sensitive horse, which has made it popular.

This horse lives in Sistan and Baluchestan, but unfortunately due to very little attention to this species, this breed is endangered. According to the evidence, a small number of these horses live on the Pakistan-Afghanistan border. But climate change and the unsuitable ecosystem make it difficult to raising this type of horses in Iran.

Taleshi horse is an endurance horse whose competitions are mostly done on downhill routes. But most men try to use this breed of horse for work. Of course, race horses are kept in better condition.

This breed of horse is one of the pure horse breeds in Iran and is mostly seen in the Turkmen Sahara region. The color of these horses is mostly gray and they have slender and elongated bodies. To prevent the extinction of this breed, the export of this breed abroad is prohibited. Turkmen horses have long limbs, narrow tails and beautiful heads and necks. Today, the purest Turkmen horses can be found in Raz and Jirgalan regions of North Khorasan province, which has the largest population of this horse

Qashqai horse or the Darreh Shori is a horse which is very similar to the Arabian horse. This horse is bred in the Darreh Shor of Qashqai tribe and is one of the most original horses in the world. Darreh-e-Shor is one of the strongest tribes of Qashqai and its people are famous for owning and breeding horses. The appearance of this horse is lucid face, excellent head, neck and strong body. This horse has a good endurance in competitions and riding due to breeding in summer areas; and it is considered as one of the most beautiful horses in Iran.

Another breed of Persian horse is Bakhtiari horse which can be divided into several samples: Komeit Horse, Siahrag Horse, Samand Horse.

Horse breeding in Dashtak as one of the historical areas of Bakhtiari has a long history. Horse riding is still one of the most popular sports among the people of these areas.

According to the history of Iran, Iranians were pioneers in all fields of equestrianism and horse breeding. Hertel says: The entertainment of the ancient Iranians was horseback riding and horse racing, breeding thoroughbred horses and participating in horse racing, and every year they bought the best race horses and brought them to the royal tribe.