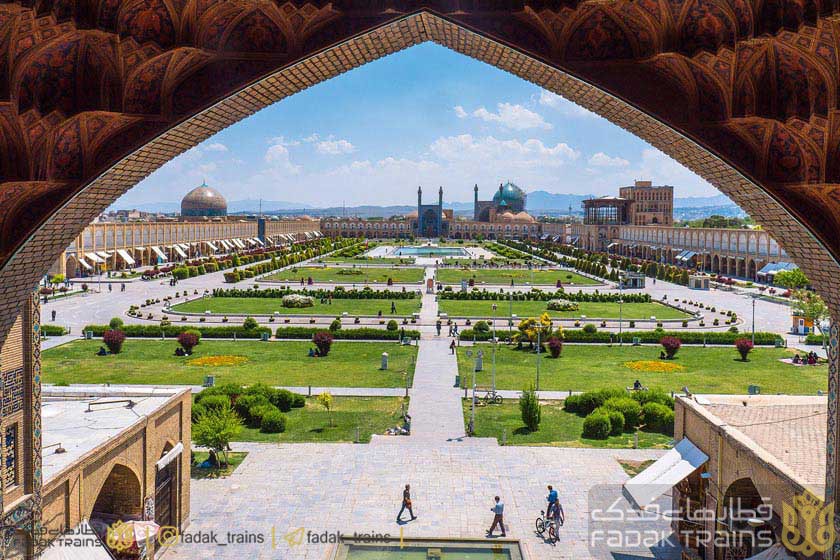 The first visiting place of Isfahan that is full of tourists all over the year is Naqsh-e Jahan Square.
So let’s get together and explore this dazzling attraction to know more about its secrets in detail.

One of the most important historical sites of Isfahanis Naqsh-e Jahan Square that also known as Imam Square (or Meidan Emam) and registered in UNESCO’s World Heritage Sites in ‎May 1978.

It is the second-largest square in the world (after Beijing’s Tianamen Square) and Sir John Chardin ‎‎ (a French jeweler and traveler) described it as the most beautiful ‎square in the world.
Naqsh-e Jahan means “The image of the world”.

It was built between 1598 to 1629 by the decision of Shah Abbas I and it was the place where royal celebrations, polo games, dramatics and military parades, and other performances were held here.
Two stone polo gates are the valuable relics that have been remained from those days.
Therefore it has kept an important part of Isfahan’s treasures in its chest.

This splendid rectangular squares is located in the city center of Isfahan that hosts a big pool with fountains dancing in the middle and completely surrounded by decorated arcades, a long bazaar and historical monuments.

On the east side of this Square, the beautiful dome of an impressive mosque attracts the attention of every passer-by, because unlike other mosques whose minarets face the blue sky, there is no minaret above it. Sheikh Lotfollah Mosque is one of Iran’s special mosques, which was built by Maestro Mohammad Reza Esfahani during the Safavid era.

Ali Qapu Palace is one of the most stunning monuments on the west side of the Naghshe Jahan Square, which was built during the Safavid era, by order of Shah Abbas I.

On the south side of Naghsh-e Jahan Square, beautiful minarets and a dome can be easily seen which belong to the Imam Mosque. Shah Mosque is one of the most significant historical mosques of Isfahan and an important structure of Islamic architecture in Iran. The Shah Mosque is a unique masterpiece of architecture, tiling, and carpentry of the 11th century.

In the north corner of the Naqsh-e Jahan Square and at the main entrance of Isfahan Grand Bazaar, Qeysarie Gate has stayed strong since the Safavid period.

The long bazaar around these monuments, is the place where you can see and buy many decorative artworks and the prettiest souvenirs of Isfahan, like Mina, Khatam, Mes (copper), Firuze (Turquoise) and Ghalamkari for yourself and your friends or family. As everything is so spectacular and amazing, you may forget the passage of time.

Inside the square, there are some horses with their carriages on which you can do horseback riding and they will take you back in time to the Safavid era as if you are the king on the horse.

The Naghsh-e Jahan Square has been popular among locals as well as tourists because of the aesthetics and architectural principles beside the historical importance and you can find the traditional atmosphere of Isfahan here, which is filled with the delicate sound of chalcography and the charming beauty of enamellers’ artworks.

This is not only a place to explore the history of this land, but you can also have fun and create different moments for yourself in this complex. Hence, if you are a fan of architecture, photography, history, and beauty, don’t forget to check it off on your bucket list.