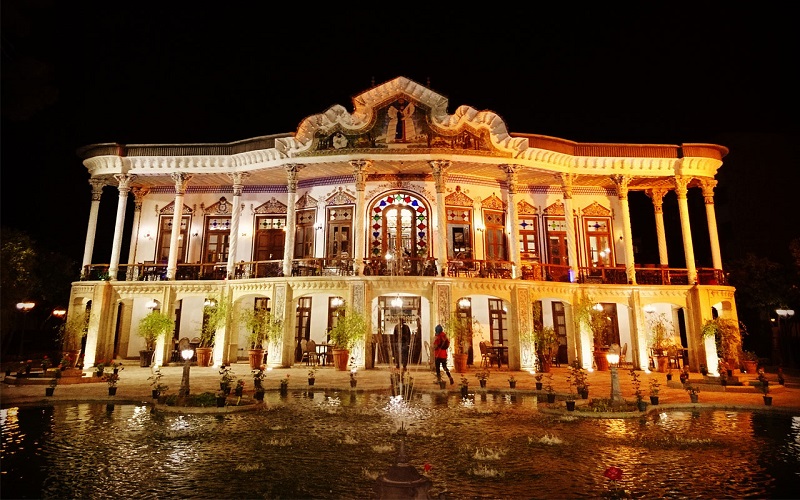 Shapouri Pavilion and Garden (or Emarat-e Shapouri (Persian)) is an Emirate with Persian-European Garden from the early 20th century in Shiraz city.
This House is from the early Pahlavi reign, and its owner was Abdol Shahab Shapouri, a wealthy Iranian merchant.
During the years 1990 to 2000, Shapouri’s family was living here but after years, the house became vacant.
It was designed and built during years of 1930 to 1935 by engineer Abolghasem Mohandesi.

Shapouri House is so specific and distinguished from other historical buildings of the region at that time.
It is built in the style of Qajar architecture and is one of the first buildings whose architecture has a free approach.

In Iranian architecture, having a balcony in the building has not been very common, but it has a balcony with 14 pillars that it’s an innovation in Iranian architecture at the time.
Also in the design of the Shapoori mansion, a staircase has been used which is not seen in any of the buildings of that period.
In general, the plan of the mansion was very special and unique in its period.

Shapoori mansion is 840 meters and it is built on two floors.
Upon entering, a big Iranian pool, colorful balcony, wall paintings at top of the stairs, the mirror work, hand-painted walls, stucco, and traditional decorations comes across, which together create a breathtaking scene.
Some of the invaluable features of Shapouri House are the western (major) façade decorations, circular and designed gypsums columns, tilings with Achaemenids designs on the upper porch.
The trees which planted in this mansion include cedar, maple, sycamore, fig, pomegranate, orange, date and geranium, and rose flowers.

This 100-year-old monument is so beautiful that it creates a lot of excitement and energy for every viewer.
From the beginning of entering the garden, involuntary your eyes involved in the abundant and busy decorations of the facade of the mansion. It is as if you have entered a world of shapes and colors.

The monument was registered on October 7th, 2000 as one of Iran’s national monuments and historical places with registration number 2781.
The cultural heritage of Fars province bought the house in 2010.
Handicrafts and Tourism Organization was reconstructed in 2008 and since then it has been used as a museum and restaurant with a capacity of 150 people.
At present, this complex is ready to host dear tourists by having an international and Iranian restaurant and a coffee shop.
Its rooms are suitable for holding meetings for up to 20 people. Booking a table on the balcony and watching the view from the 2nd floor, especially at night, is the best choice.

+Shapouri Pavilion and Garden Opening hours are as below: