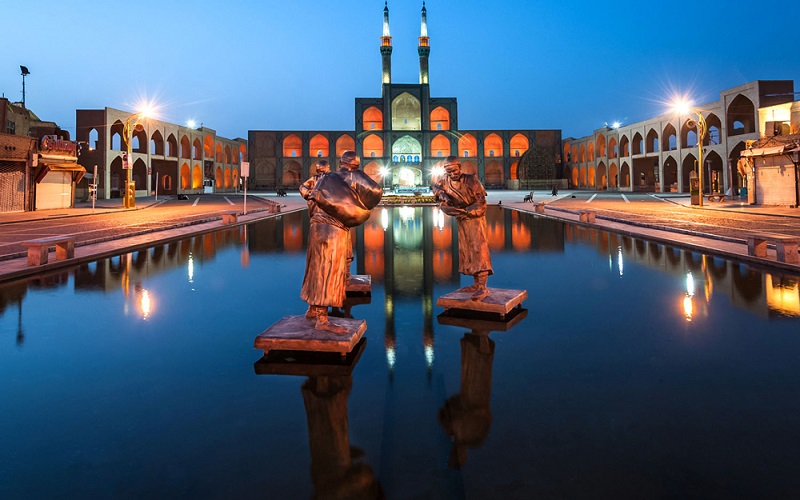 It's one of the most significant historical and tourist complexes in Yazd.

Amirchakhmaq is the name of an ancient square in Yazd that was built during the Timurids era.
This square was one of the main squares of the city, where people gathered for various ceremonies.

In the 8th century, Jalal-al-Din Amir-Chakhmaq, one of the commanders and rulers of Shahrokh Teymouri, during his rule in Yazd built a complex for the further prosperity of Yazd.
Completing this project was not possible without his wife’s (Fatemeh Khatun) help and advice.

Her tomb is located on the north side of Arsen Amir Chaghmaq.

Moreover, renovations and reconstructions were made within different periods as well.

As Amir Chakhmaq Complex contains various ancient buildings, It's good to take a brief look at some of them to find out why they leave their visitors in wonder and admiration.

Amirchakhmaq mosque that also known as Dohouk Mosque, is the oldest structure in the square.
Its exact location is the southern part of the square.
From the viewpoint of aesthetics, dimension and importance, this mosque is one of the most outstanding buildings in Yazd.

The beauty and Greatness of this mosque are such that it's the second most important and significant mosque in Yazd after the Jame Mosque of Yazd.
The interior design looks just as eye-catching as the exterior. Many Persian and Islamic details all over the place have made it a majestic representation of Iranian art.

The dome of the mosque is curved and cracked and is covered with green tiles and an inscription in Kufic script is arranged about it.
Restoration of the tiles of this historical monument has been done by Professor Mohammad Ali Falahati Marvast.

Amir Chakhmaq Mosque was registered in the list of national monuments of Iran in 1341 with number 247.

Amir Chakhmaq water reservoir, which dates back to the Safavid period, is located next to Haji Ghanbar Bazaar and was nationally registered in 2006.
In total there were three water reservoirs in this square, that only two of them remain today.

Also, this complex have been nationally registered as Amirchakhmaq complex with number 2416.

This square, which is the symbol of Yazd, is located along Salman Farsi Street.
Recently, the view of this square has become much more attractive and magnificent with its pond and Messi sculptures.

In a corner of this square, you can see a large palm tree that has been located in this place since Safavid era and also is used in Muharram ceremonies.

Today, Amir Chakhmaq Square is still shining in Yazd and attracts many tourists each year.